Zander Court Community Garden is based in a small community building amidst a sizeable 1970s brick-built estate on the Tower Hamlets/Hackney border.  Zander is a fish and all the estates around have a fishy name - literally they include Mullet, Grayling, Lampern, Elver and Zander - most of which are river fish and not varieties you find very often in local fishmongers.  The Garden Club punches well above its weight though and has diversified its operations across the local landscape to include estate gardens, the nearby secondary school and church. The Club House, which is the hub of operations, was part of the original design of the estate and since 2005 the residents have run a Gardening Club, which is helped and supported by their landlord, Tower Hamlets Community Housing. A few years after setting up, they used the fish theme to secure funding from Hugh Fernley Whittingstall to grow herbs which complement fish.  So within their little perimeter garden they started to grow sweet cicely, a lovage, bay, rosemary, thyme, tarragon, summer savory, chives and dill, alongside a variety of scented shrubs, roses and flowers, so that local residents could pick sprigs of scent through the railings as they passed by all year round.  In January Sarcococca confusa bowls people over with the pungency of its small, white flowers and in June there's this rose (see right), white, pink-edged Jasmine and Rosemary.  Into a very small space there are planters, decorated with stencils, which volunteers from Barclays Bank helped to build. The planters are also on the roof and a variety of veg and herbs from different countries fill them up - Bengali squash was sourced from the nearby Spitalfields City Farm and there is mint, thyme, garlic chives, beetroot, tomatoes, runner beans, lettuce, leeks and potatoes  and Nagar chillies all crammed in too. There are also planters on the roof with alpines, grasses and sedums. 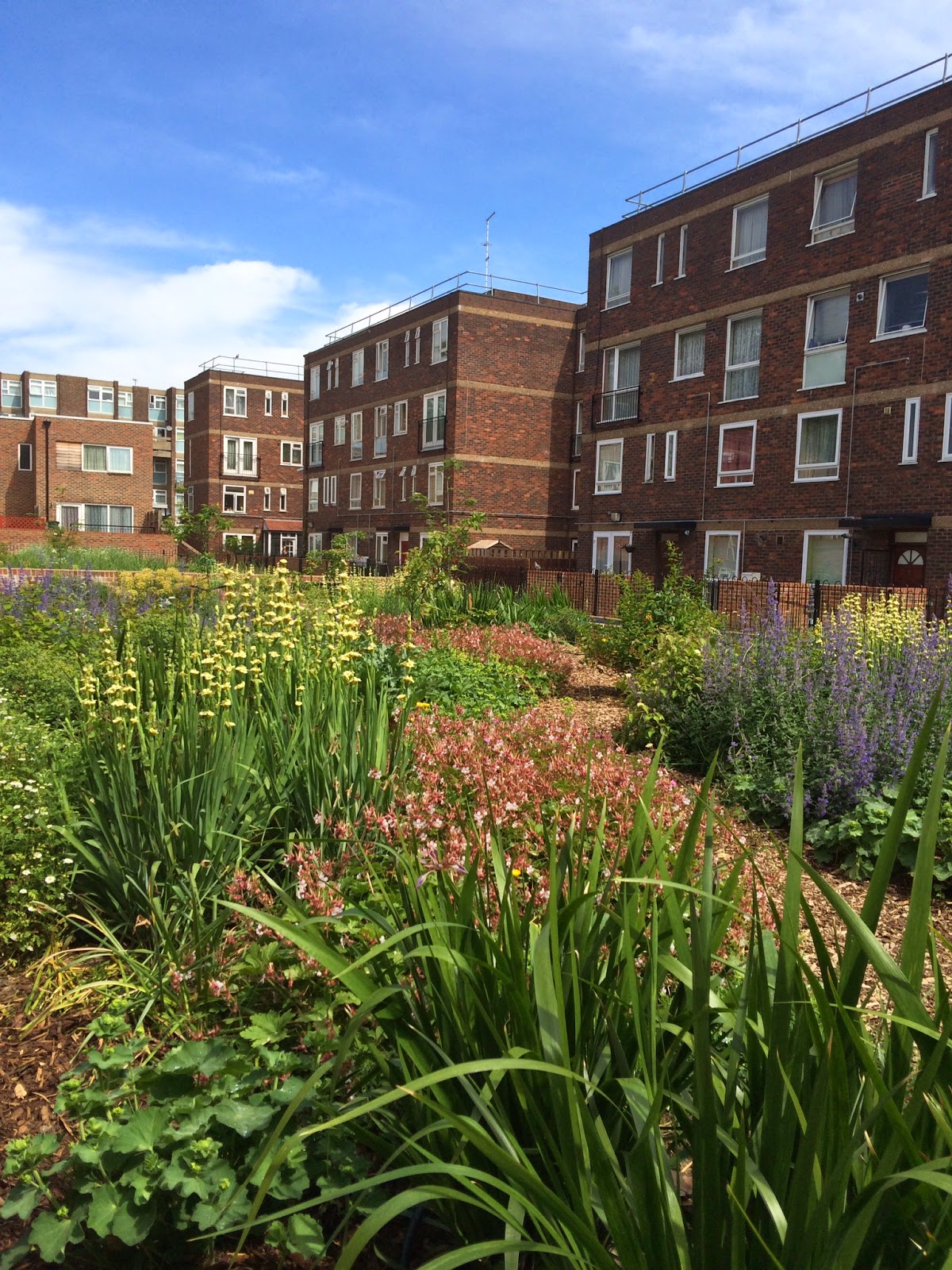 In the middle of Elver Gardens the community group has been working on a wildlife-friendly garden.
The residents voted for a garden which they could look down and across to from their flats, and Sisyrinchium, Nepeta, Echinacea, Crocosmia and Feverfew have been planted alongside a wildflower mix of annuals, around winding, narrow paths, which, with crab-apple trees, creates a quasi-ornamental wildlife space which is very pleasing on the eye.  At night-time sprinklers come on - the new, programmable, irrigation system courtesy of Lloyds Banking Group, and it's much needed as the garden sits in only eighteen inches of soil.


A fascinating research project into dry space is taking place in the nearby St Peter's churchyard. Test beds have been marked out in the churchyard garden and are being carefully monitored to see what grows well and where. The site is very typical of dry shade, so often a concern in London gardens, but especially so here under the massive London plane trees which abound. The aim of the test beds is to engage with the conditions, not fight them, and to take into account both the plants used and how they are managed. Three giant compost containers are being built by Price Waterhouse Coopers, to ensure there will be a future, sustainable source of food for the dry soil.  From above on a slate-clad wall, a violet, Victorian rose looks down on proceedings.

Visiting Zander Court Garden takes you on a tour of the estates and the church - and, on your way, there will be plants for sale of many of the interesting species this community group use in their gardening. A treat not to be missed next year. 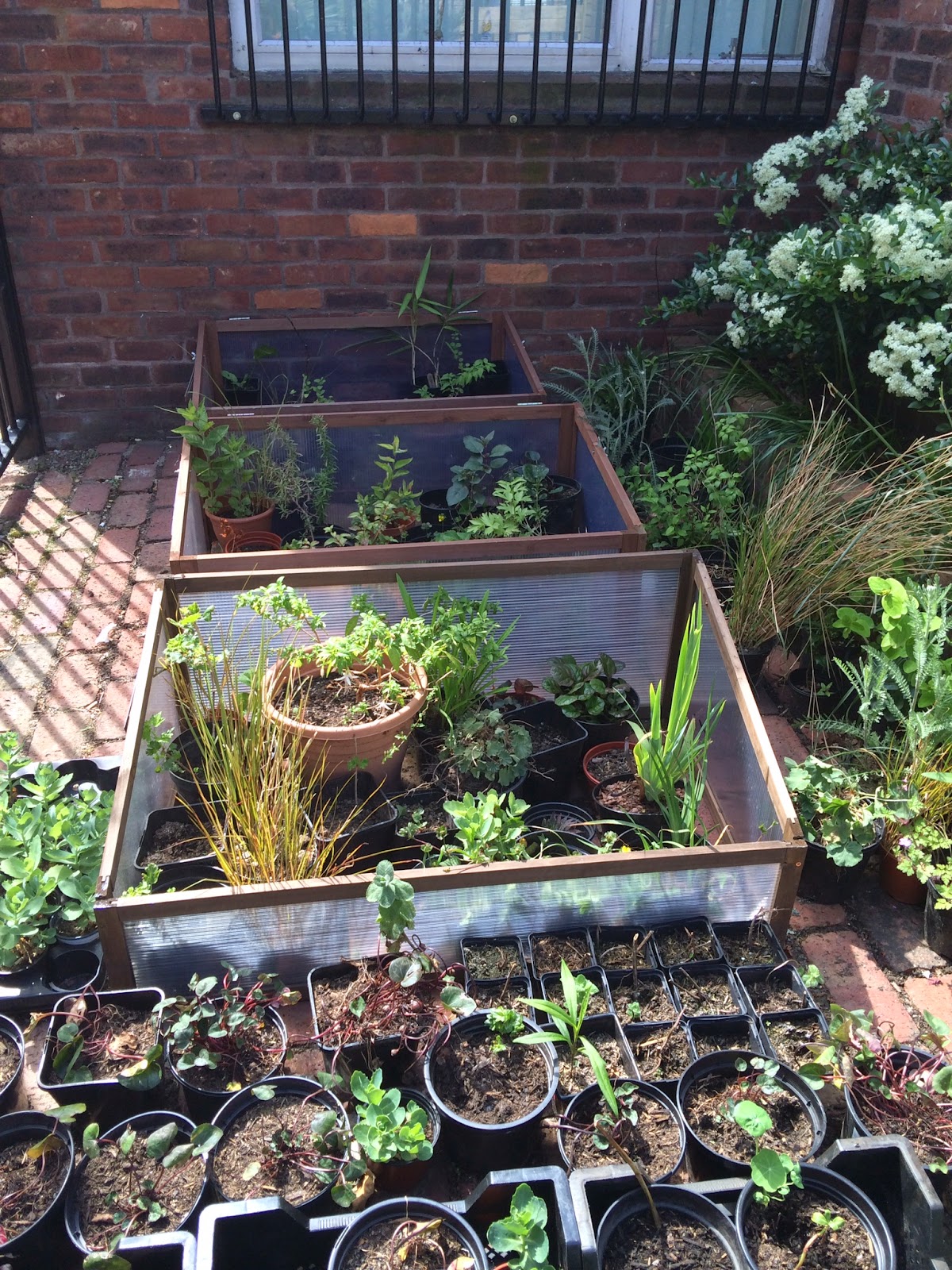