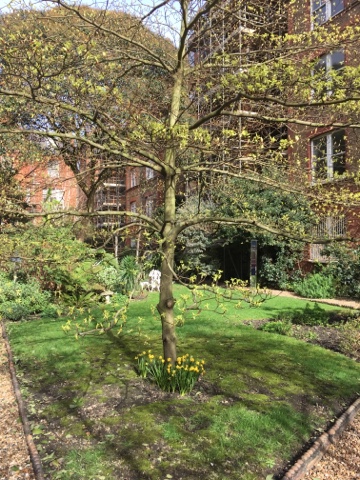 Bina Gardens East is a privately owned delight of a garden, hidden by houses and railings off the Old Brompton Road.  When you enter the garden you are greeted by a magnificent specimen of a wedding cake tree (Cornus contraversa 'Variegata'), whose branches reach outwards in symmetrical, horizontal layers. 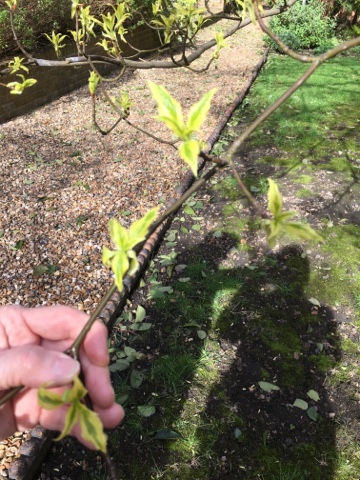 ﻿The leaves are tiny at first, like this, but flesh out as summer comes, until the tree stands proudly for everyone to admire its layers, just like a traditional wedding cake. 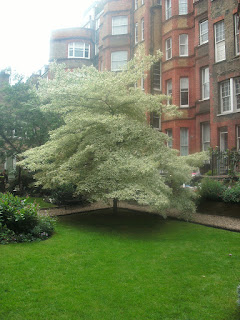 When Alice Ulm, the garden's owner, first saved Bina Gardens East, she found the tree surviving as a tiny stump about two foot high.  It stayed that height, sulking, for about five years until it decided it had better get on with growing and has never looked back. 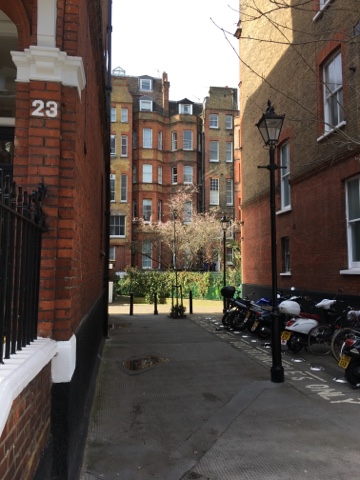 Bina Gardens East guards its charms from the world and has to be discovered by strolling along from Gloucester Road tube station, until you find Dove Mews, and peer through the railings.  The garden was laid out by the Gunter Estate in the 1880s, and some of the original rope-edged tiles for delineating the paths still remain.  James Gunter (1731-1819), whose wealth from confectionery secured the original purchase of the land, specialised in ice cream, a treat much loved in the Georgian London of the day. 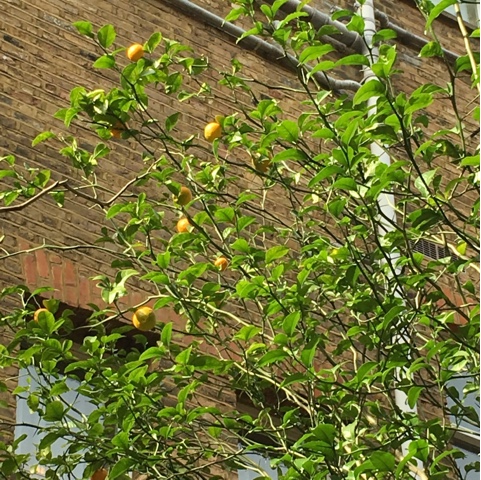 The shelter provided by the houses around has resulted in several hot spots - with an orange tree showing off its oranges in one corner when I visited - alas it is still not hot enough to eat the oranges.  But the gardeners have been inventive with plantings in hot corners, and banana trees coexist happily alongside echias and ginger lilies.

Although the garden is privately owned, it is shared with residents of the neighbouring streets, who can subscribe to use it, with all the proceeds of their annual fee going to the garden.  Some other private garden squares in Kensington have formal committees with the rent historically collected by the council with the rates, an advantage for an assured income of a garden square; but in Bina Gardens East they collect the subscriptions themselves.  Less committees, more gardening. 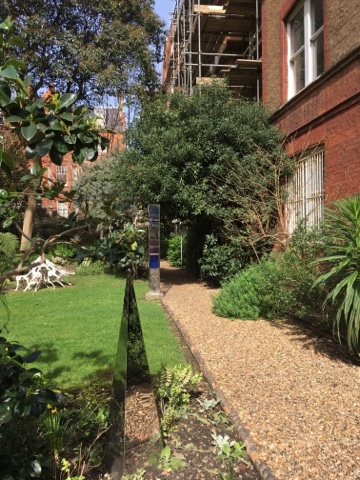 The use of modern statues and ornaments draws the eye along paths and down into the depths of the garden.  Care has been taken in restoring the garden to try to follow what was left of the original layout of paths and in one corner a knot garden has been planted.  After the garden was first created by the Gunter Estate, ownership changed and at one stage it was owned by Falkner House School nearby until it was put up for auction, Alice Ulm bought it, and became a very proficient gardener, learning on the job as she restored it. 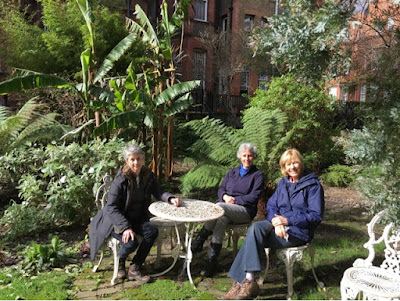 In actual fact, three gardeners are the mainstay and backbone of the garden.  Alice Ulm, on the left is the owner gardener, Lisa Simmonds in the centre is the Head Gardener and Susie Maier on the right is the assistant gardener.  Here they are in March, with the garden already green and pleasant around them so early in the year.  Alice and Lisa have a long history of gardening in Kent and they all agree that Lisa, with her lifelong passion for plants and horticultural knowledge "basically tells us what to do".  Susie's horticultural knowledge has also developed since she started helping them at Bina  Gardens East and they were all instrumental in different ways in saving the garden.  A true friendship of a shared love of horticulture. 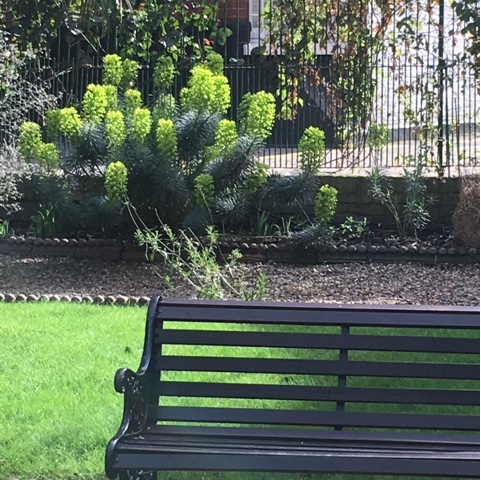 They work jointly on new projects each year.  Last year the bed by the railings behind this bench had red-leaved bananas to contrast with the green  of euphorbia, and was  topped by the cup and saucer climber (Cobaea scandens) shown below.  It had continued to flower throughout the winter.  You'll have to visit in June to see what they transform the bed into for 2017.  Whatever they decide, the new plants will be clearly labelled - the labels with full Latin names come out in the summer, courtesy of Lisa. 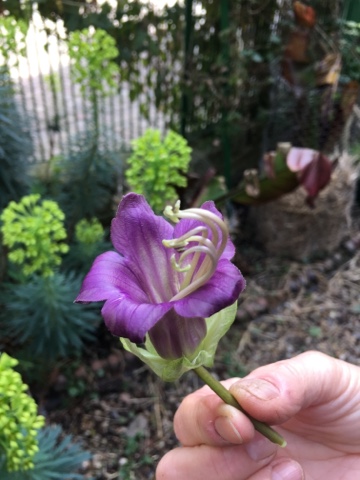 A wall on one side of the garden was covered in the star-like flowers of Clematis montana.  Nearby in summer the hot lips salvia (Salvia argentea) blooms brightly in red, and elsewhere you will find a variety of shrubs and plants including several tree ferns,  Chinese privet (Ligustrum lucidum), Skimmia reevesiana, Viburnum x bodnantense, and climbing hydrangea (Pileostegia viburnoides) to name but a few. 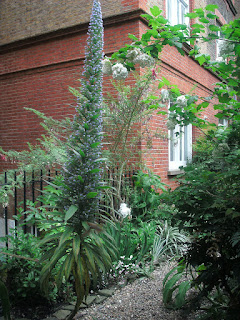 The Echium pininana, shown above, delighted visitors in 2016, and they are hopeful it will perform again in 2017. 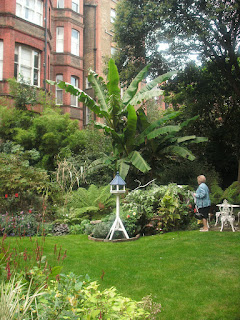 And this is what, in their different ways, three gardeners and an ice cream man saved for posterity - the garden in all its splendour in summer.  In 2017 Bina Gardens East has been chosen as a 'Hidden Gem', so look out for it in the Open Garden Squares Weekend guidebook and see if you can complete the 'Hidden Gems' competition and win a unique invitation to tea at Duck Island Cottage in St James's Park.