Ladbroke Square Garden is a spectacular private garden square moments away from the hustle and bustle of Portobello Road. Given the location, not many people will be aware that seven acres of garden stretch out before you once you pass through the square’s iron railings. 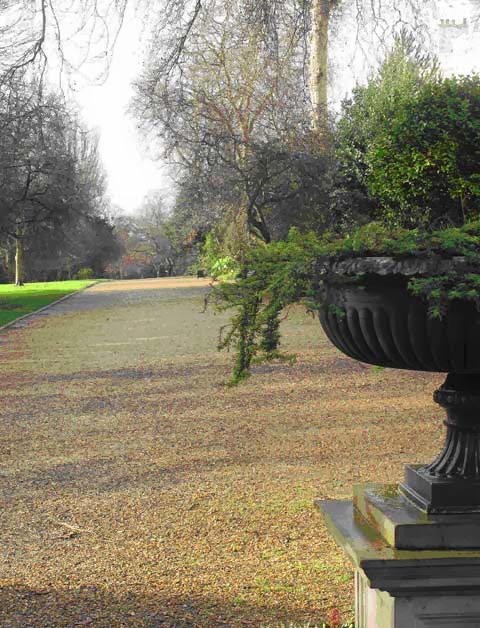 Running from east to west across the northern side of the square there is a very wide, pressed gravel path, whose ochre hues catch the sun. Trees, of which there are over 300, are dotted along the path, some being so old that they require support, such as the cut-leaf turkey oak. The London plane trees are in fact the oldest and they rise up in all their glory in various places. Catkins could be spotted in the woodland areas, along with winter aconites. There is also a hornbeam, splendidly showing off its bare black, winter branches, speckled with green lichen, and a very rare hawthorn – Crataegus heterophylla. This hawthorn was such a rare one that there was no specimen of it at Wisley. The head gardener at Buckingham Palace took cuttings of it and grew it on, successfully producing saplings to share. 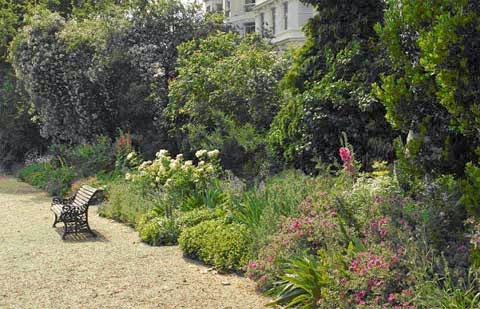 Henrietta Phipps showed me around the garden on a rainy January day. She has lived near the garden since 1963 and used to be in charge of all the horticulture. She now looks after the trees, which are meticulously labelled and inspected yearly. Her love and knowledge of all the plants shines through, as did the sun eventually. Leaving the formal wide path at the top of the garden, she led me through winding paths which connect all the different ‘gardens’ inside. There are two playgrounds for children; the one for the under-sixes has an enticing, long, wooden train and the other is devoted to adventure and climbing. Both are discretely landscaped amid the trees. An old fountain nearby has been transformed into a new planting bed with snowdrops, blue scillas and crown imperials following on in succession. Elsewhere there is a winter-flowering, shrubby honeysuckle (Lonicera fragrantissima) and viburnums to scent the air. The main gardener and the part-time assistant look after the garden beautifully.

There’s a place in this square for everyone to play – including dogs. One lawn is for quiet contemplation, another for football. A rose arbour with roses climbing through stout ropes borders the quiet garden. And then a tennis court appears – apparently championed by the wife of Roy Jenkins, Dame Jennifer Jenkins. You can join Ladbroke Square Garden if you live within 100 yards of its railings (times have changed, the qualifying distance used to be 200 yards). It is managed by a private trust, has 650 members and costs £200 a year. Three local primary schools use the garden regularly, there are annual events for members, including a summer party and a traditional bonfire night party in November (with a competition for the best Guy Fawkes). And a well-kept noticeboard of events and garden information.

The land now forming the square started life as a racecourse, and was laid out as the largest of 16 communal gardens of the Ladbroke Estate in 1849 by Thomas Allason. It is now listed as Grade II by English Heritage. One unusual feature of the square is the way the private gardens of houses on its north side lead directly into the garden. There are imposing private gateways here to admire, each with an individual rope-tile-edged flower bed, including one which stood out with the yellow flowering shrub Coronilla glauca ‘Citrina’ and a scented viburnum. Several of these private gardens have cultivated espaliered trees on their borders. Visitors to the square on Open Garden Squares Weekend are encouraged to respect the privacy of these gardens, and to wonder at the landscape architecture and mature plants – but no peeping into private domains, please! Have a cup of tea and slice of cake in aid of the Royal National Lifeboat Institution instead. 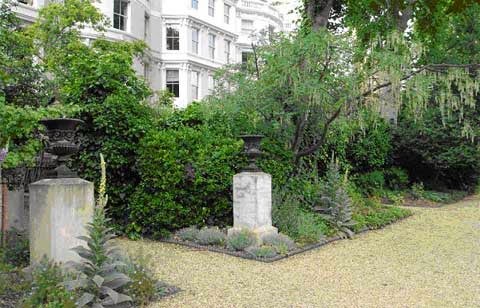