A Roof with a View


Situated on the north bank of the Thames, with possibly one of the best views of the Shard in London, the Nomura building in Angel Lane is a modest edifice in comparison with the giant skyscrapers springing up around it. 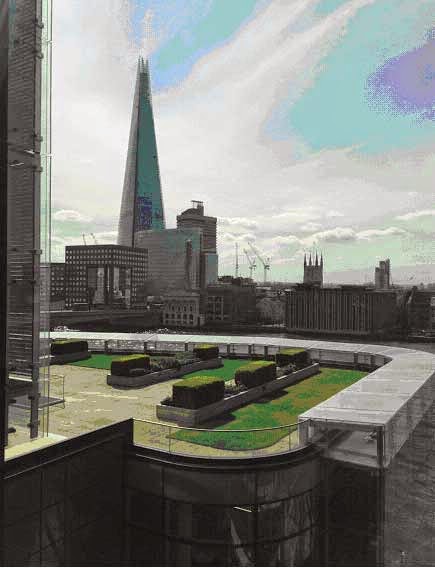 Modest on the outside maybe; but once inside the offices of the Japanese Investment Bank, Nomura International PLC, its secrets are revealed.  Hidden away amongst the many offices is the home of three incredible switchboard operators, Eileen Arrowsmith, Linda Monehen and Tessa Palmer, who had the good fortune and goodwill of excellent employers to be allowed to create a vegetable garden on the roof.  They garden in their lunchtimes, snacking on fresh salad leaves and peas, and storing their jellies, gardening gloves and bags of compost under their desks. They even bring in precious seedlings on the train and underground from home. 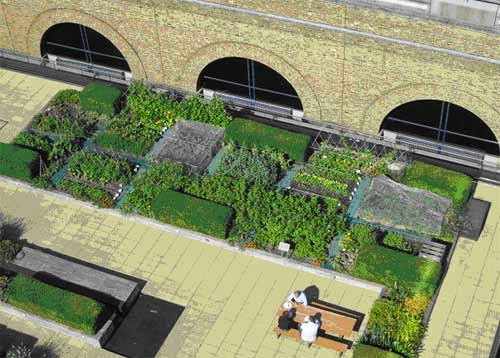 Their kitchen garden on the sixth-floor roof is a little shy of a standard 10-pole allotment plot, but is intensively farmed with 25-plus varieties of vegetables.  It sits alongside a minimalist, modern garden layout of immaculate rectangles of lawn, box hedging and grasses, alongside ferns, hellebores, aquilegia, gaura and lavender plants, beautifully maintained by Tony and Matt of ISS Facilities Landscaping. Everywhere there are seats and tables for Nomura employees to enjoy the views and and eat al fresco.  There’s also a special bin for composting the many banana skins afterwards.
The array of vegetables grown up here is extensive: three types of beetroot, turnips and tomatoes, garlic, Japanese onions, cucamelons, garlic, beans, chard, squash and parsnips, to name but a few.  The chef from the Nomura kitchens has first pick of the produce for client dining, and the rest of the harvest is sold to staff from a trolley every Thursday, with any proceeds going to charity.

There aren’t many birds to eat the fruits of the garden six floors up – a hawk is brought in every week to deter seagulls; but lots of bugs and slugs and snails somehow make the journey up successfully, so Eileen stores nematodes in her office fridge as an organic way of preventing them eating the fruits of their labour.  They have installed a bug hotel and a ladybird climbs across my knee as I sit chatting to them in the sunshine, whilst white butterflies flit by.

The vegetable garden has become quite a talking point, having been spotted from other rooftops and having now won the Masters’ Trophy in the Flowers in the City competition.  The gardeners went proudly to Mansion House to collect their award from the Lady Mayoress of the City of London.

In fact the commitment to all things green has now permeated throughout the Nomura building.  On the highest floor there is a sedum roof and a bee hive.  More planters are being built by a social enterprise company in the East End from old pallets to increase the amount of bee-friendly flowers.  Water from the roof is used as grey water for toilets, and part of the office building has been designed to be environmentally friendly, dispensing with air conditioning and using that old-fashioned method of opening windows for ventilation.  All this commitment has won the company the Sustainable City Award for its outstanding contribution to enhancing air quality, for which Terry Jones, the Facilities Manager, and David Crawley have played their part.

As well as the Shard across the river, there are views of the Gherkin, the Cheese Grater and the Walkie Talkie skyscrapers.  Even amidst all the new build, St Paul’s cathedral remains silhouetted from one angle. Workers at Nomura will open this garden to the public for the very first time on the Open Garden Squares Weekend on June 14th and June 15th 2014.  Don’t miss eating strawberries and cream and cucumber sandwiches, and sipping non-alcoholic Pimms in this unique location in the City of London.  But, most of all, come to admire what enterprising, green-fingered, employees can achieve in their lunch hours and spare time – it is truly inspirational.