"We are so remarkably airy! - Mr Wingfield thinks the vicinity of Brunswick Square decidedly the most favourable as to air." So spoke Isabella, the sister of Emma in Jane Austen's famous book of the same name.  And although located yards away from the busy Euston Road, lots of residents and workers were enjoying taking in its airs on the sunny September day when I visited. 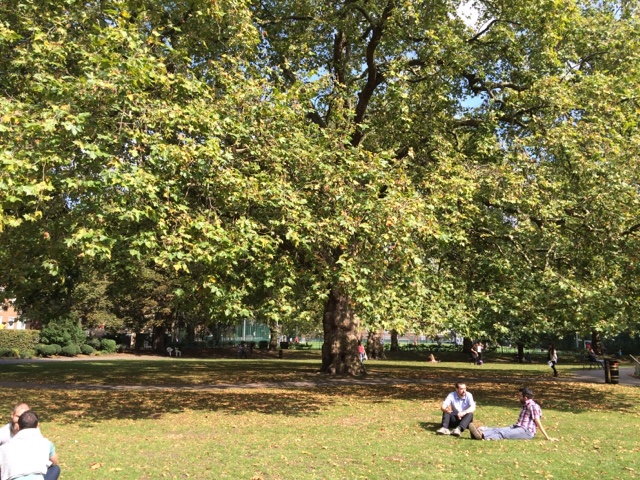 Brunswick Square started life in what once was the very edge of London.  It was originally surrounded by Georgian houses on three sides with the Foundling Hospital to the East, and although time has taken its toll on the urban architecture, its original plane tree still stands proud. At over 200 years old, it lays claim to being the second oldest plane tree in London.  The oldest is in Berkley Square. The tree was in full splendour before it prepared to shed its autumn leaves, with the dappled sunlight glowing through the green. 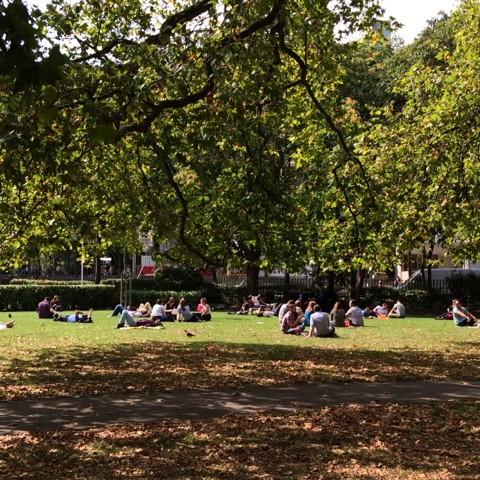 The circular flower bed in the middle of the square has recently been replanted and the new plants were being carefully protected and tended.  They included Thyme, Sedum, pink Cosmos, Verbena Bonariensis, Bergena, Sissirynchium, Red Hot Poker, and Echinacea, alongside assorted grasses.  It's good to see that Camden Council, supported and jollied along by residents and volunteers, can still sometimes give gardens the priority they need in these austere times. 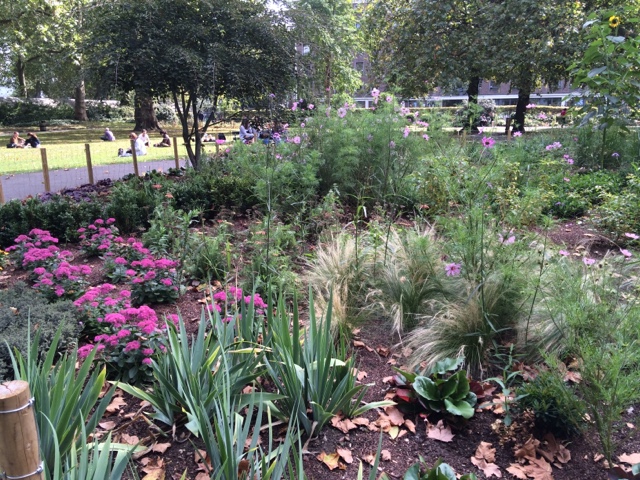 The Friends of Brunswick Square also organised the planting of some tall, orange, striking, Mexican daisies at the west entrance to the square.  They work with TCV Green Gym in their efforts to upgrade and improve the gardens. 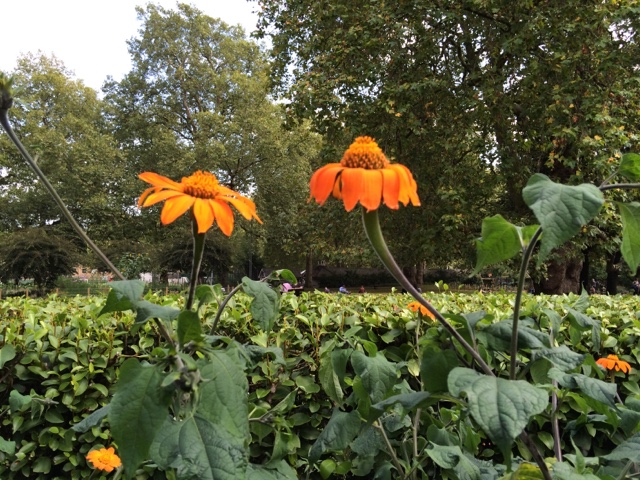 The edges of the square are curved, and, in Jane Austen's day, one could imagine the wide circular sweeps taken up with carriages and horses trotting by.

Now there is a Grade II listed phone box on the edge of the park, which seems to be perfectly sited for posterity. 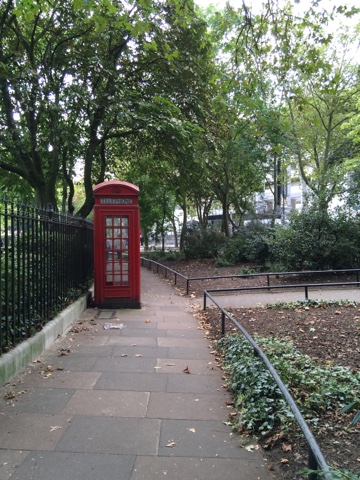 Brunswick Square had lots of famous residents in the past.  Virginia Woolf used to live here with other members of the Bloomsbury group. Most evocative is the image the children's author, J. M. Barrie, conjured up of Peter Pan flying across the park into Wendy's bedroom window.  The Georgian house Barrie lived in was demolished after the war, along with all the others around the park, but this is where it would have stood, just off the square.  Barrie's estate later benefitted the establishment of nearby Great Ormond Street Children's hospital. 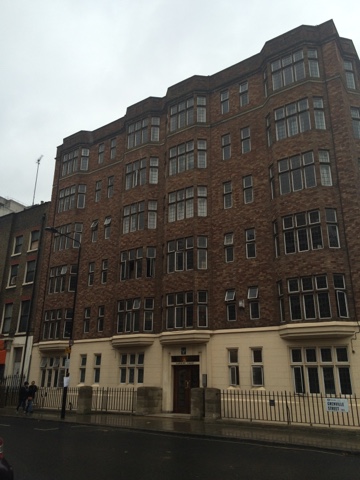 At first glance this London garden square feels like it is missing its Georgian houses and street scene, but the residential and shopping area bordering the park on the west, The Brunswick Centre, built in the 1970s,  is now Grade II listed instead.  It provides a busy and pleasant eating, retail and recreational space, complete with Curzon cinema. 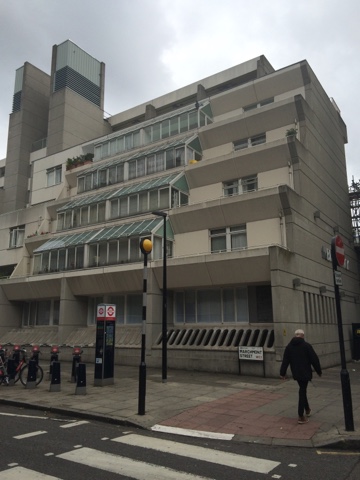 Nearby there are lots of adjoining garden squares and spaces through which you can wander. You'll need to be accompanied by a child to gain entry to Coram Fields though.  This was the site of  the Foundling Hospital, established by Thomas Coram (1668-1751).  Child poverty was so bad at that time that when it received public funding and opened its doors to all-comers, it was inundated with 100 babies a day.

St George's Gardens nearby is very pretty - originally a graveyard when the local churches ran out of space for burial.  Oliver Cromwell's favourite granddaughter, Anne, is buried here. Relatives had to guard the graves after burial to avoid the body snatchers taking their loved ones.   Not far away there was a private anatomy school which boasted a tank with 17 cadavers. 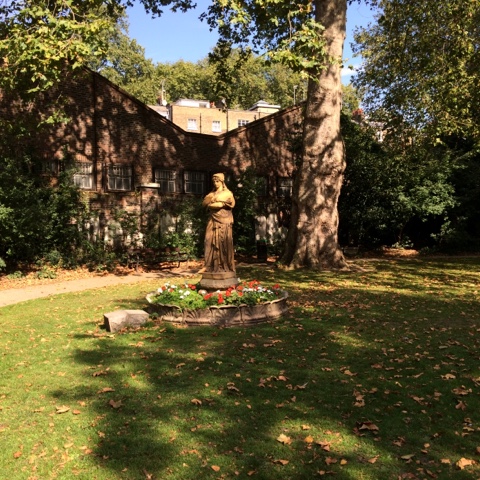 This September Susan Jellis and the Friends of Brunswick celebrated 200 years of Jane Austen's association with the square with a wide variety of talks, walks and concerts in the Emma 200 Festival.  They are a creative and energetic bunch of volunteers who promote their square widely, as well as opening it for a variety of events at the Open Garden Squares Weekend (taking place on June 18th and 19th in 2016). 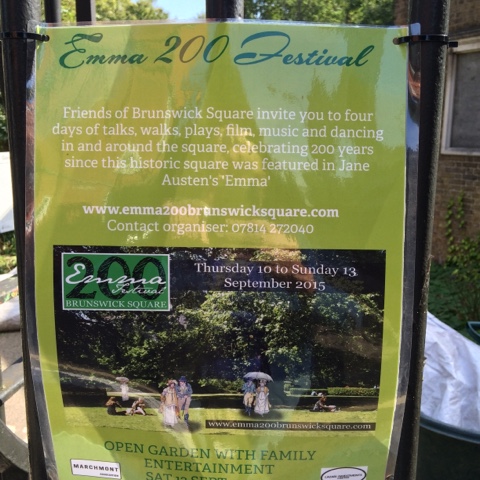 To find out more about Brunswick Square, there is an excellent book by Ricci de Freitas (Tales of Brunswick Square, Bloomsbury's Untold Past) or check out past and future editions of the London Gardener, Journal of the London Historic Parks and Gardens Trust for articles by Susan Jellis.   In the not too distant future, an article on Peter Pan is planned.