Through Instagrammers' Eyes and Lenses

Open Garden Squares Weekend may be over a month ago but we have been looking at all your wonderful photos from the Weekend on Instagram. There are so many gardens and here at Duck Island we don’t always get to see everything; so it's brilliant to be able to experience the Weekend through your eyes and lenses! We’ve especially enjoyed your perspectives and creative angles on our gardens. Here are some of our favourites!

We love this looking-through photograph of Belgrave Square from @pedroh1962 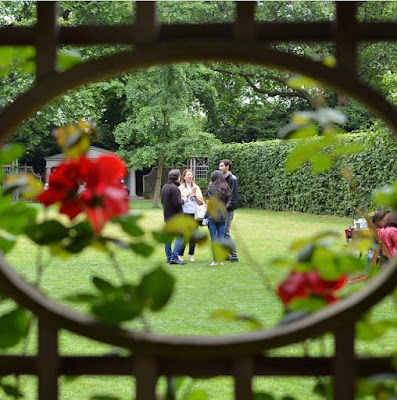 Using the fencing to frame the garden visitors really captures the idea of unlocking your own secret garden experience!

We had the pleasure of the London-based Instagram group @igerslondon joining us on the Saturday for an Instameet.

It was tough to choose a favourite from their meet-up pictures but we loved the simplicity of this image. 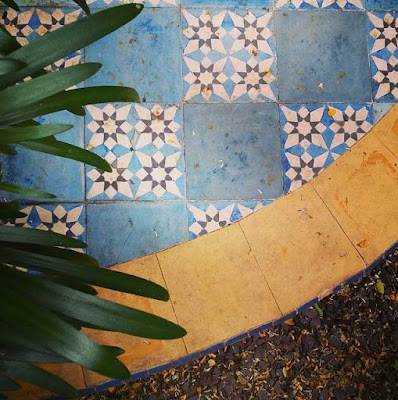 Up on the rooftop of the award-winning Nomura International PLC garden there were birds of prey for visitors to meet, and many people were able to learn more about some of the nation's favourite birds. We love this snapshot of the inquisitive beautiful hawk from @homepheonix 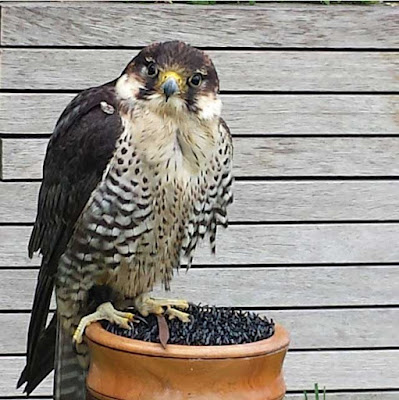 This year we teamed up with Instagram sensation @symmetrybreakfast to create a limited number of special breakfast hampers for visitors to enjoy picnic-style in the gardens. Instagrammer @iswanting not only took this fabulous picnic garden photo but also brought her own (symmetrical of course) breakfast trays to enjoy the hamper! 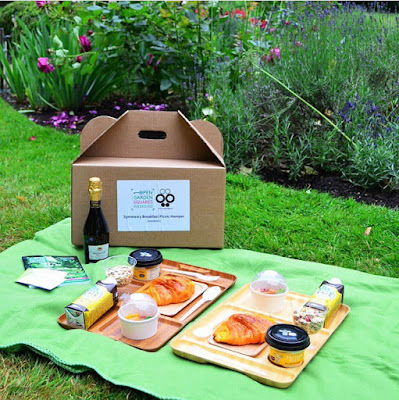 Proof that natural and man-made can exist in harmony, this lovely photo by @monokraum mixes the calm, tranquil gardens with modernist architecture of the Barbican at Beech Gardens, one of the newer gardens. 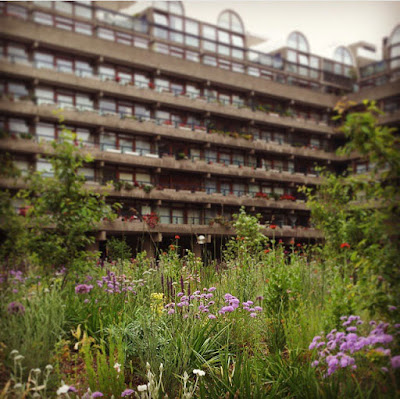 We absolutely love this photo by @juliakolbeek of The Skip Garden Global Generation near King's Cross. 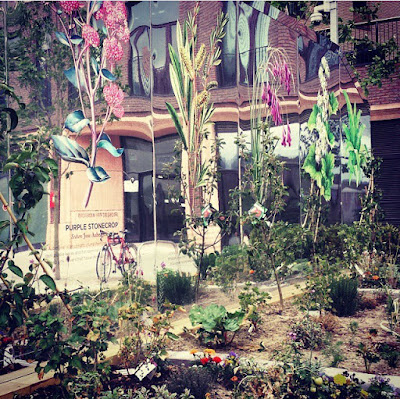 This clever reflectagram captures the spirit of the garden's organic urban agriculture and also incorporates art and installation.

Speaking of gardens and art, many of our gardens feature sculptures (you can use our on-line sculpture trail to find many of them).

This striking David Harber features in Eaton Square by @pedroh1962 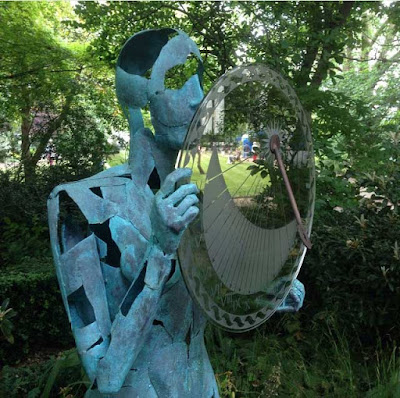 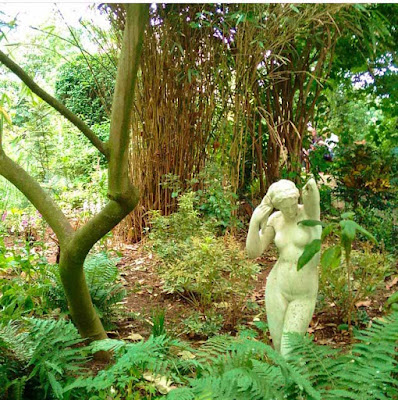 @neversitstill took this photo of wonderful Dancers by David Wynne in Cadogan Place North Garden. Evidence of the breadth of design of the sculptures and ambiance they bring to our gardens. 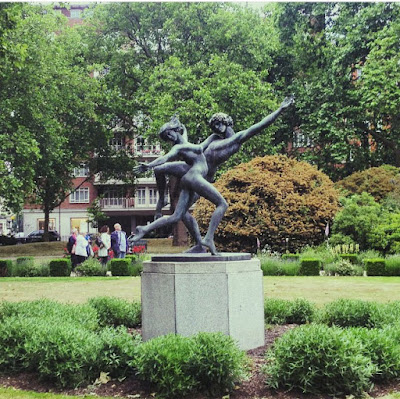 We also brought poetry to our gardens this year with The Poetry School’s Mixed Borders collaboration. This photo by @londonse4 was taken in Postman's Park. 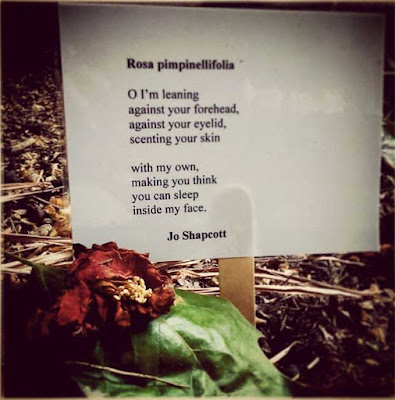 Capturing the fantastic source of inspiration and truly moving nature of this garden.

Posted by Open Garden Squares Weekend at 20:08 No comments:

Bowling in the Backlands

Tucked away near Notting Hill are the backlands, green spaces of different kinds, created for the St Quintin Estate, built between 1880 and 1900.  One of the backlands has been a bowling club since its foundation in 1903, and despite its ups and downs, residents have kept the flag flying for this charming recreational space ever since. 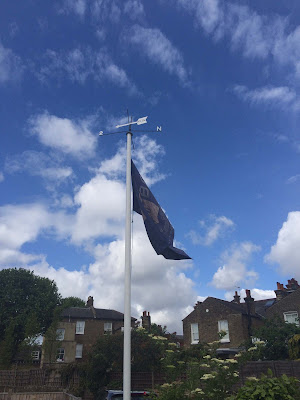 The West London Bowling Club employs a professional greenkeeper to maintain the grass to a good standard for the 40 or so bowlers who use it regularly, but it is volunteers who have been beavering away since 2014 to reclaim the roses which surround it. 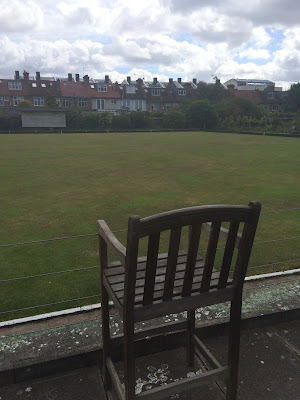 Roses have been given pride of place in the restoration of the garden.  Along the side of the green a red rose lives happily next to a berberis, the colours of each complementing one another, while
around the corner, alongside the scoring board for games, a genista was in full yellow bloom when I visited.  Since local people brought back life to the bowling club in 2014, there has been a lot of
propagation of roses with a view to not only maintaining and restoring those around the green, but also reclaiming a wilderness on the east side.  This work is led by Dennis and his merry band of
volunteers from a local allotment site, St Quintin Avenue Community Kitchen Garden, who turn up every Sunday afternoon to restore the garden here, once the eighth rink, where children used to learn to bowl.  Albertine and Seagull roses have been planted, new peach and pink roses grafted to replace those strangled by ivy, brambles restrained, hops trained to climb high with the new roses, and all adorned by beautiful bird songs in the background.  A treat to enjoy on Open Garden Squares weekend. 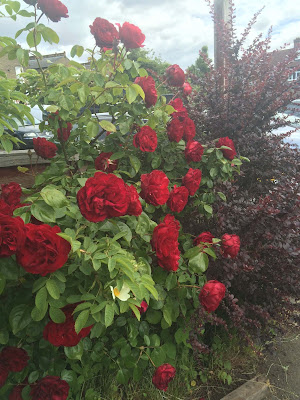 The bowling green was formally opened in 1920 and bowling has taken place here ever since, pretty much.  Although other backlands on the St Quintin Estate became allotments when war started, here they continued bowling, and fortunately dodged falling bombs.  The beauty of the garden was recognised in successive years from 1968 to 1978, when it was an annual prize winner of the Kensington and Chelsea Gardens Competitions, as well as producing many bowls champions.  In the 1970s the ownership of the estate moved to the Legard family and the club is now one of the three remaining backlands of the area, with the Nursery Road site fighting creeping property development, and the Kelfield sports ground also remaining.  The bowling club boasts a degree of protected status, but supports the other remaining backlands in their attempts to retain green space in the area, as well as improving its own. 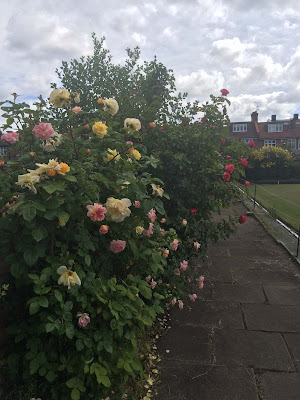 Ruth Hillary, Chair of the Association, with the help of the St Helens Residents' Association, has been leading a successful make-over of the club since its re-opening in 2014.  Up with all the new trends, barefoot bowling is possible here, and the clubhouse has an inviting bar and free wifi.  Benches and tables have been sanded and scrubbed, new planters constructed, and there are
good relations with neighbours, with fairs and events for local people in the summer and at Christmas.   There is an emphasis on attracting and engaging local families, with a new orchard
and pleasure ground for picnics and teas planned, not forgetting the local hedgehogs, who will still find shelter here in a wild corner, when the garden is completed. 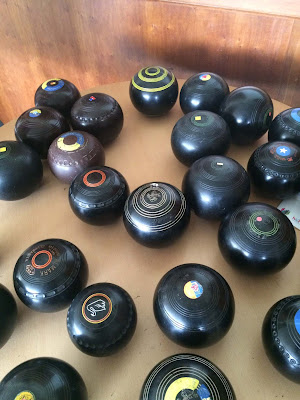