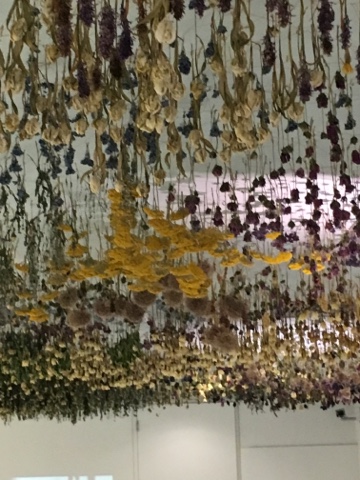 The first time I saw an installation by Rebecca Louise Law, I stood, staring upwards for ages, transfixed by its beauty.  This time her artwork was the first exhibit in the newly established City Centre of the City of London, and it was just as captivating the second time. 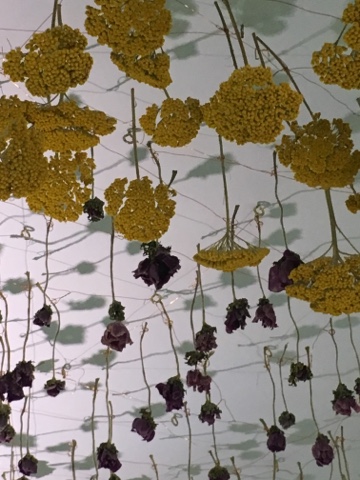 She had created this art installation, entitled 'The City Garden' by collecting flowers and natural materials from across the public gardens and spaces in the City of London. Sponsored by the London Wall Place Partnership, they were hung, using copper wire, across the ceiling of the reception hall of the centre.  They aren't, unfortunately, completely everlasting - this was an art installation of limited duration - but as they hung in their dried state, they reminded me of everlasting flowers like helichrysum and echinops.  And they were one of two gems I saw in the City on Open Garden Squares weekend last June. 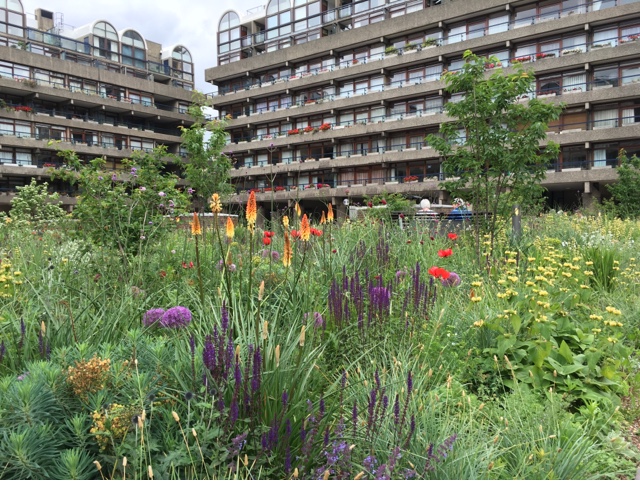 Just a  short distance away, the second treat awaited me in the recently planted Beech Gardens in the Barbican, where its designer, Nigel Dunnett was due to come to talk about his new creation. He arrived at the City Centre and we snaked off in ones and twos in his wake to discover the new gardens, escorted by volunteers from the Friends of City Gardens. 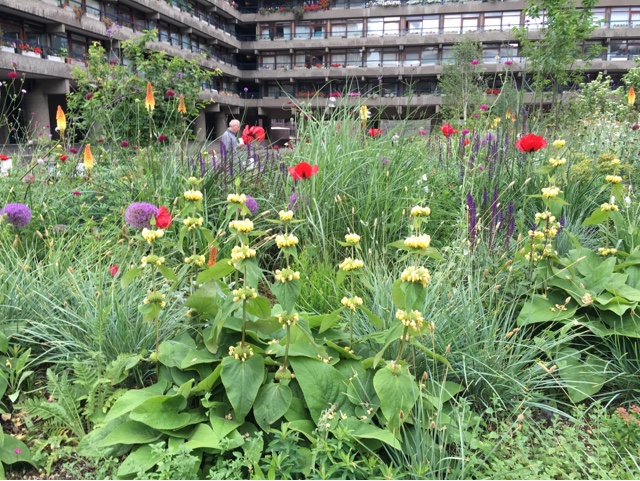 Professor Nigel Dunnett, to give him his full title, is the Professor of Planting Design and Horticulture at Sheffield University.  He will go down in history as one of the creators of the meadow-type plantings, which stole the nation's heart at the 2012 London Olympics.  As he said to us, he considered the plants in the Olympic Park to be its best legacy - the plants, not just the buildings, were the stars of the show. 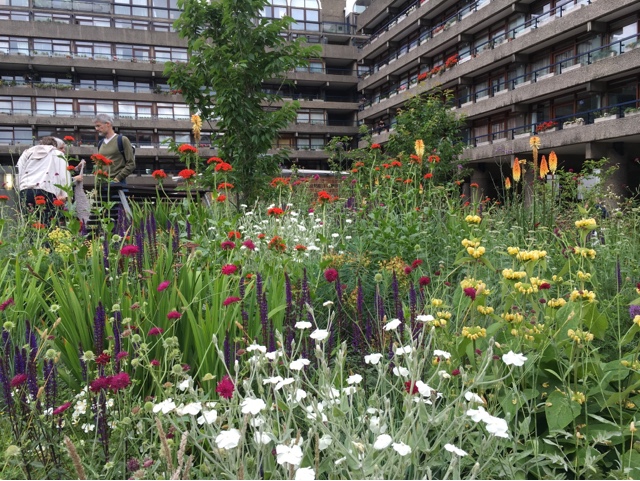 Nigel recounted to us his childhood love of gardening.  His parents were keen gardeners, which always helps, and he grew up in a world of traditional English gardens, devouring seed catalogues for bedtime reading.  Aged 11, he joined a local garden club, and after the lure of seed catalogues he discovered the now famous paperback book by Christopher Lloyd, The Well Tempered Garden, which opened his eyes.  Living in a village in Kent, he found a teacher who took him on nature walks, where he learned the common names of wild flowers and discovered the joyous, uplifting and happy feelings of being in a woodland environment.  In a woodland you are part of the whole experience, the scent, the smell, and the waft of the breeze. 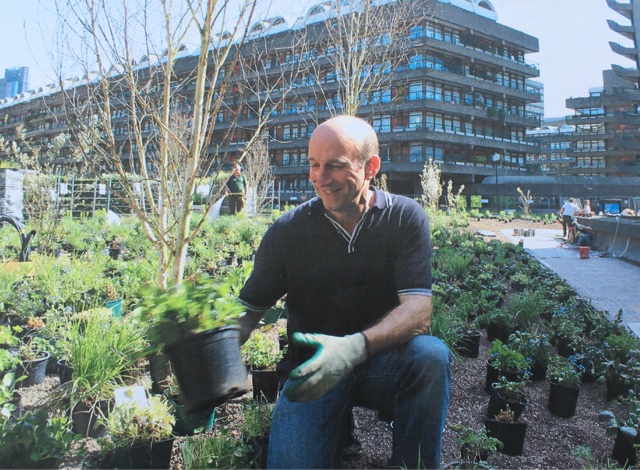 Nigel works according to two main principles - the art form, tuned to nature; and a belief in creating healthy cities and liveable places. Here is a pic of him planting Beech Gardens, where he used a framework of woody plants and shrubs, with perennials and annual coming up through and by their growth. He loves the simplicity of wild flower meadows, which often have only two or three plants flowering at one time, but is clear that in his work he does not seek to copy or ape a wild flower meadow but to create something akin but new. 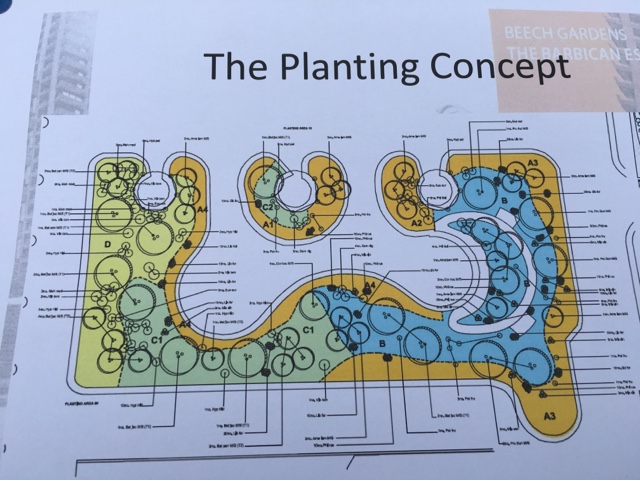 This plan was his concept for the gardens.  He has now travelled across the world, taking in wild flower meadows in China grazed by yaks, and brought back his findings to help cities as they struggle with climate change - using the experiences of wet meadow land to design plantings capable of sustaining floods and water run-off, reducing road widths, designing storm water cascades, and planting flowers and grasses which are loved by urban dwellers. Loved so much, that the workers at the John Lewis HQ took to eating their packed lunches on the edge of his creation on a roundabout. His work in Sheffield, at the John Lewis HQ and the Queen's Gallery at Buckingham Palace are examples of the diversity of his work. 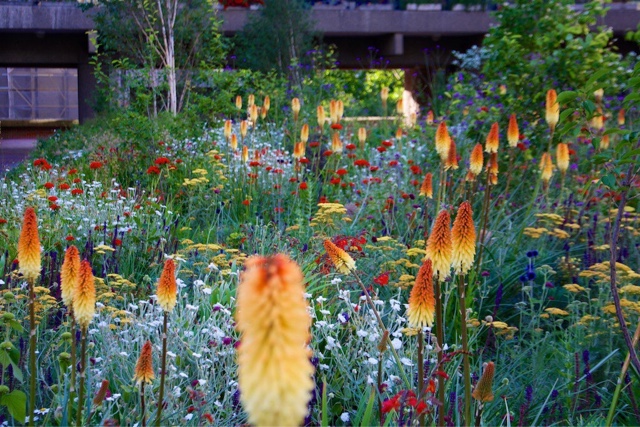 Nigel sells his seed mixes through his company, appropriately named Pictorial Meadows, and the picture above shows one of his more recent creations. In Trentham Gardens in Stoke on Trent there is even a garden railway running through one of the meadows.

Posted by Open Garden Squares Weekend at 15:59 No comments: