When you put the words Garden and Tate Modern together, you conjure up images of beautiful but angular, minimalist spaces. Silver birch trees planted in rectangles, swaying in the wind next to crisp gravel paths or precise green lawns.  Beside this vista hides Tate Modern's Community Garden, secluded behind a galvanised steel grid, across which ivy has been grown. The observant passer-by will spot the windows in the ivy and inside the contrast reveals itself, for the Community Garden is round and curvy, with angularity confined to the rectangular plots on which the garden was built.

Hugging a side space on the Thames side of Tate Modern, near the Millennium Bridge, the garden was started in 2004 and opened to local residents living within walking distance in 2007.  It's a collaborative venture between the Bankside Open Spaces Trust and the gallery.  When Tate Modern was built in the enormous power station by the river, the lives of residents, Southwark and indeed London changed forever, for it turned out to be the front runner of a plethora of cultural regeneration projects along the south side of the river. Residents had to live with the enormous disruption of year-on-year major building projects; so the commitment of Tate Modern to community involvement and the emergence of the Bankside Open Spaces Trust were welcome indeed. Now, although many of the new riverside apartments may sell for astronomical sums, gardens are not a common feature, so this communal garden serves its purpose well, as evidenced by the fact that it has over 700 people registered as friends and an average of 300 visits per month. 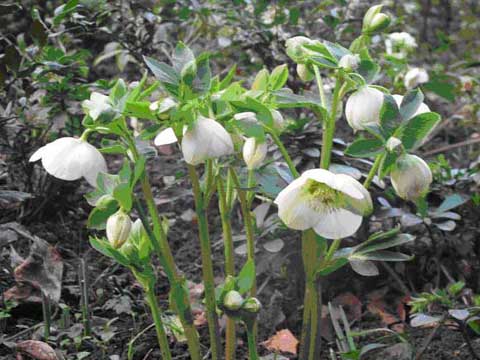 With additional external funding from the Metropolitan Parks and Gardens Association, the garden's curved spaces and pond have been planted with over 100 different species, reflecting a mixture of indigenous and Mediterranean climates and designed in a muted colour scheme. When I visited for the Open Garden Squares Weekend, it was a glorious winter's day - bitingly cold but with the odd waft of warmth from a clear blue sky. A volunteer was digging over the soil hardened by snow and frost to reveal hellebores. Three varieties of hellebore have been planted- Helleborus niger, Helleborus argutifolius and Helleborus orientalis - but it was the simple Helleborus niger which stole the show and my heart.  By June, when the garden opens to the public, the hellebores and bulbs will have disappeared, but the Mediterranean plants, the pond, the rose pergola and the ferns nestling amongst logs will take over to delight you. Fruit bushes and herbs will also be budding and scenting the air.  Pond life should be thriving – this one is home to newts, frogs, dragon and damsel flies.  There used to be over 100 goldfish, but a heron flew by and gobbled them all up on one visit!  Nonetheless, despite the heron, this continues to be a favourite spot for pond dipping for local schoolchildren. 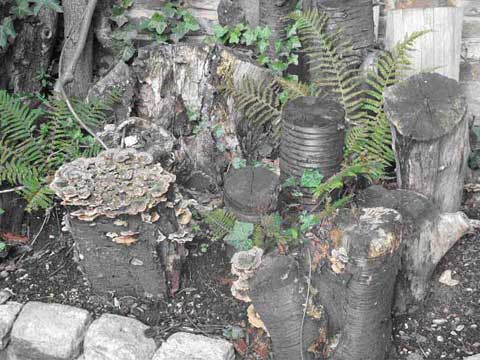 The garden started out as a wildflower garden in 2007.  The soil was rubble from the building work and the flowers loved the poor conditions. Beautiful though they were, the garden was too small a space to limit itself to the short flowering season of wildflowers and gradually the mixed planting was introduced, along with a lot of compost and tender loving care.

The garden contains some beautiful seating, and wooden features, all designed and built by Arthur De Mowbray, who specialises in garden structures for the public arena.  The shelter near the entrance is particularly striking.  From it you can look out across the length of the garden.  Beautiful places to sit, look and contemplate are important.   The litter bins are also bespoke – with wooden shells as lids.  And the courtyard walls are adorned with round plates of art – produced by older local people using concrete and objects found on the nearby river shore. 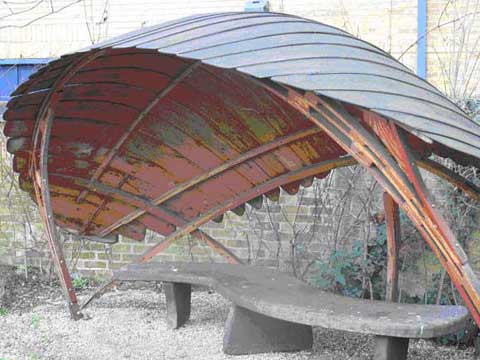 The Community Garden is definitely worth a visit.  Afterwards, you can pop into the gallery, where there’s a café and shop and, of course, lots of modern art.  Not that the garden isn’t also art – this is Tate Modern’s permanent exhibit.

Information on visiting the Community Garden at Tate Modern

See how it looks in the summer
Posted by Open Garden Squares Weekend at 09:00 No comments: