As you leave Hampstead Underground Station and head due north up Holly Hill, you enter into steep and undulating terrain. Apart from glorious Hampstead Heath, housing now dominates the land, but, if you look hard, traces remain of the old countryside. Here the founder of the John Lewis Partnership, John Spedan Lewis, occupied a large Edwardian mansion, complete with gatehouse and extensive grounds. The houses have long since been redeveloped into private and council accommodation, but part of the gardens were squatted and gardened by local people and now comprise Branch Hill Allotments.

32 allotments are arranged across the combe in the land, where it descends and forms a small hollow below the old gatehouse, and they can be spotted by peering through the iron gates on the corner of Oakhill Way, Branch Hill and Frognal. When I visited in November, the winter’s manure for next year’s vegetables had just been delivered and had been distributed amongst the plots. Like much on the plot, the gardeners plan collectively and share the costs of gardening. 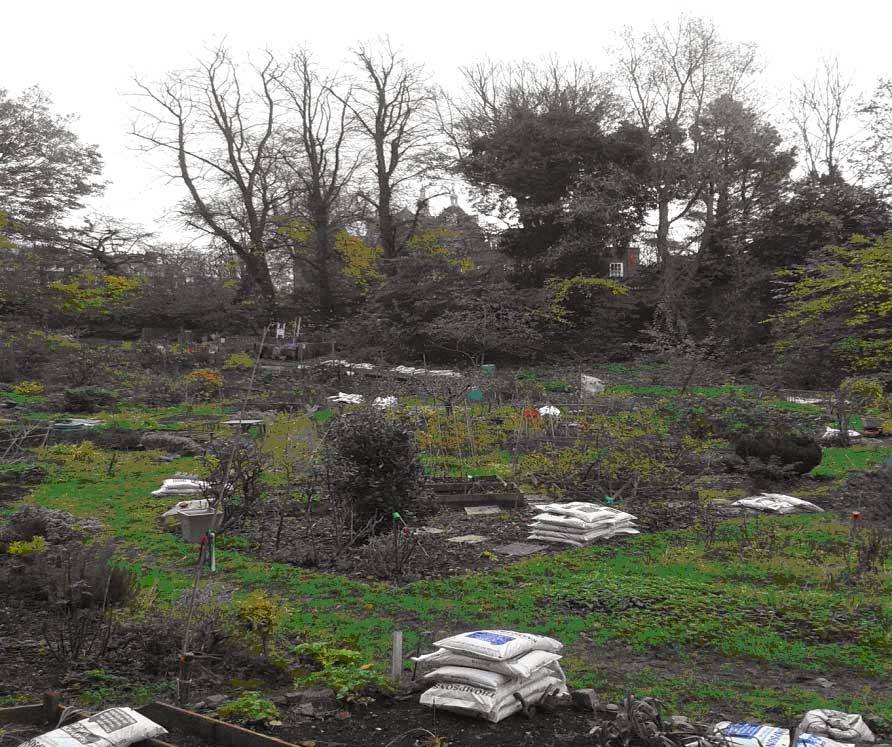 The collective spirit of gardening is strong – there are no individual sheds on each plot and people come together in a communal area in the centre, sheltered by trees, and sporting garden tables and chairs and barbeque. This results in a relatively open, uncluttered feel. Come spring, the gardeners will jointly tidy this outside space and use it for rest from their digging. It has become the place to meet and converse. Tools are housed in a communal shed, built into the hill, which was once occupied by a tramp, who, according to legend, lived on a pile of beer cans and was a real character. In fact many of the original occupants of the site were characters in their own right. The site had been abandoned, but they found their way in through a gap in the fence and simply dug and established their own vegetable plots – a coming together of the freedom of the Wild West in staking out one’s territory, and the collective spirit of the hippy era. Such freedom did not last forever and the uncertain status of the collective allotments gave way after the 70s and 80s to a campaign in the 1990s for official recognition from Camden Council. The Heath Society supported the gardeners in their quest, Branch Hill Allotments Association was born and a good relationship was established with the Council, which lasts to this day. The Council first laid out the existing plots and landscaped the site and has negotiated a shared management system with the tenants.

William Tanner, Chair of the Branch Hill Allotments Association, will open the iron gates for you to see the plots, should you pass by when he is there digging. The gates were built with left-over iron fencing from Russell Square. The tenants are aware that they should share their fortune with others, and do so readily, not only on the Open Garden Squares Weekend. There are only 200 individual allotments plots in Camden and waiting lists are long closed. Branch Hill has 500 on its waiting list. Schools visit regularly, and there are many friends of the allotments who help out.

They also take seriously safeguarding the local wildlife. Along the length of the site, a corridor of green, wild woodland is kept, a borough site of nature conservation importance, as part of Camden’s biodiversity plan. Beehives, both the old traditional wooden variety and the modern plastic sort, are scattered around the edges of the plot. Many of the honey bees died after last year’s cold winter, but have now been nurtured back and restocked. And down in the bottom of the combe lies a wildlife pond, created from the boggy marshland created by the old Westbourne River. It’s all delightful, from the plot of a recently deceased founder (Don Hill), which is now lovingly maintained by another tenant until it is reallocated, and from the autumnal peace of the wildlife areas to the bustle of spring and summer conversations and activities. It’s well worth a visit next June. 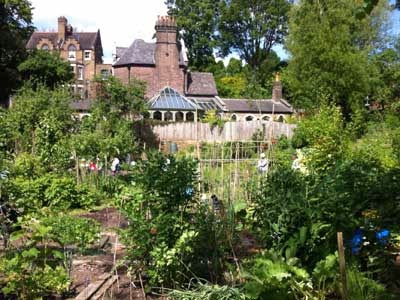