Behind the Convent's Walls


Across the road from Ham Common stands St Michael's Convent. Its walls are built to safeguard the seclusion of the nuns inside, so the uninitiated might know nothing of the wonder and delight of the four-acre garden they contain.

Anglican nuns are a bit of a rare breed. The nuns here are part of an order established in 1870, and so it has fallen to the Community of the Sisters of the Church here to cherish the gardens of the convent and this duty has been taken up by their inspirational gardener, Dominic and his assistant. Dominic describes his work as 'the best job in the world' and it only takes a short walk around the grounds to see how his love of the gardens manifests itself in every nook, cranny and garden bank.


The grass across several of the acres is kept long, with swathes of paths cut through it to guide the visitor from one area to the next. Entering the main wild area in early summer shows the clever use of wild flowers. Instead of lamenting the spectacular spread and growth of wild garlic, it is feted here and allowed to show off its fluttering flowers. Cajoled and corralled to the banks of paths, it winds a white and green carpet to stun the visitor.
Onwards from the wild garden you are led through grassy orchards with benches aplenty where you can stop and drink in deeply the sights and smells of the flowers, fruit and ornamental trees around you or wander off to the Labyrinth or Bible Garden. The Bible Garden is undergoing a revamp this year to prevent some invasive plants, such as the bay laurel, taking over. The hyssop is being restored to its rightful place, along with other plants named in the Bible. A nun designed the idea of a Bible garden several years ago, an innovative and inspired concept.


The wild garden will be spreading to the vegetable garden this summer, where a bed has been planted with wild flowers, Olympic Park-style. What is especially striking is that all this beauty has been achieved on a shoestring budget. The vegetable beds are lined with sasta daisies, marigolds and step-over gooseberries. Dominic usually only gets enough each year for seeds (for supplying the convent with fruit and vegetables), and grows comfrey to feed the veg but longs for more supplies of compost. 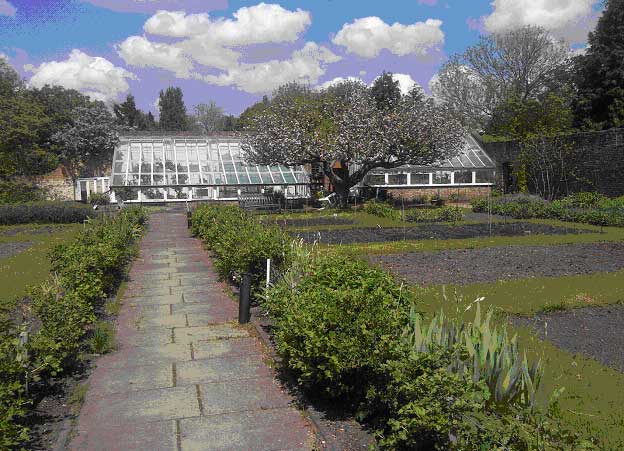 The greenhouse in the kitchen garden houses a vine said to have been a cutting from Hampton Court centuries ago and the wide lawn at the back of the main building sports a 300-year-old mulberry tree. Sadly the tree's age is beginning to tell and its boughs are nearly prostrate - lovingly supported by some wooden struts, but in serious need of some stouter props and professional advice to prolong its life. I hope it hasn't decided to give up the ghost at the sight of a new, young, mulberry tree waiting in the wings and planted nearby, just in case.

This garden has participated in Open Garden Squares Weekend for six years and we look forward to welcoming it again for next year’s event on 14 & 15 June 2014.  It's definitely one not to be missed and shows what a debt we owe to committed and talented gardeners like Dominic.