Where have all the graveyards gone? 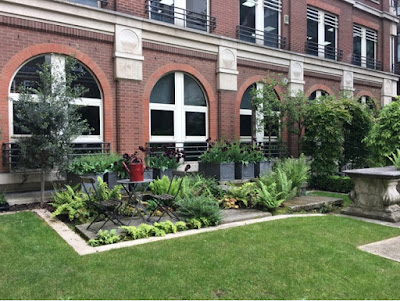 Vestry House is one of our 31 new gardens for 2017 - opening for the very first time to the public on the Sunday.  Small but perfectly formed, it has been created on the site of the graveyard of St Laurence Pountney parish church, which was destroyed in the Great Fire of London in 1666 and never rebuilt.   You can see here one of the sarcophagi which would have filled the space in times gone by.  The planting tubs complement the tomb which remains and when I visited they were spilling out  tall black tulips and the ferns had just unfurled their new fronds.

In fact, many of the gardens in the City of London used to be churchyards in an earlier life.  Some churches were burnt down  in the Great Fire and others were bombed during the London blitz.  In the intervening Victorian period, an act was passed which turned many of the City's churchyards and burial grounds into gardens.  Most of these churchyard gardens are owned by the diocese (or the Bishop of London) and are managed by the City of London Corporation.  But Vestry House was sold about six years ago and its new owners, Eduard Truell and Cedriane de Boucard/Truell, have been taking their horticultural responsibilities seriously.  Vestry House is the London office of Disruptive Capital (their business) and the Eduard Truell Foundation (a Conservation Foundation), and just across the lane is the Rectory House garden, the sister garden to Vestry House.  Alas Rectory House is not open to the public, but you can peek through the railings as you leave.  It was built after the Great Fire of London, and stands on parts of an old Roman wall and palace.  It has had a variety of owners including wine merchants and the l'Anson family, and the front garden is also a bit of the old churchyard of Laurence Pountney church. 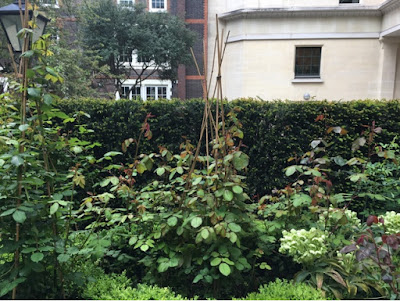 As you stroll down Laurence Pountney Hill, you will find the garden on the corner on your left, a street up from the River Thames, protected by sturdy iron railings adjacent to Vestry House.  Passing through the gate, there is a striking display of bamboo wigwams set inside box hedging, with a variety of David Austen roses to scent the air.  In the winter months the hellebores hold sway here. 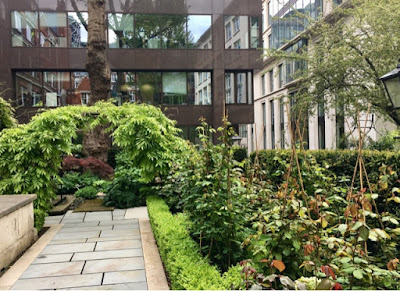 On the path ahead of you are two arches of blue wisteria. Despite all the tender care of Marion Blair, the Head Gardener from Lavenders Blue, they have stubbornly restricted themselves to leaves for the past four years - but her magical touch and a heavier hand with the secateurs this year have produced the first flowers, still seeking cover amongst the greenery, below. Across the road, a white wisteria is much more forthcoming with its flowers. 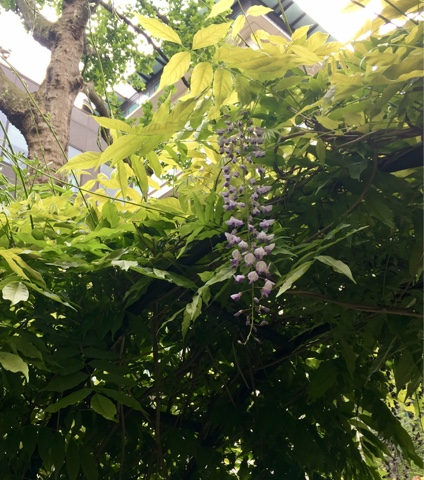 Marion has introduced woodland planting to the garden, bringing in  bio-diversity with herbaceous plants and bulbs.  And the flowers have loved the extra sunshine which the pruning of a very large London plane tree has created. 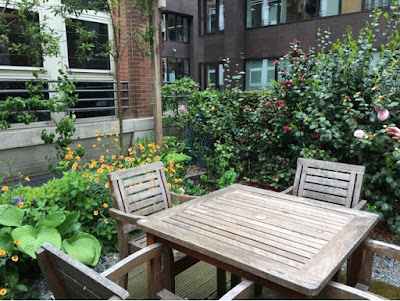 Once through the wisteria arches, there is a quiet meeting area, used by the staff in Vestry House.  Geum 'Tangerine' and fresh, new hosta leaves, with a camellia hedge or espaliered fruit trees (pear and apple) in the background give this space a restful feel for meetings. 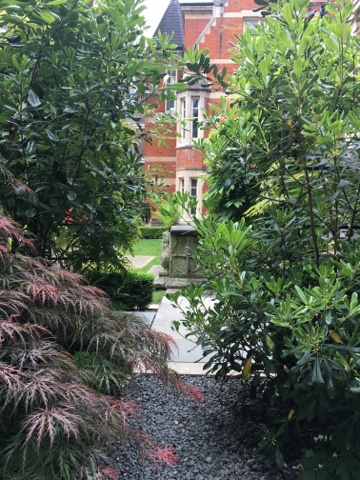 The lines of the garden from east to west help to elongate the small space and draw the eye onwards. 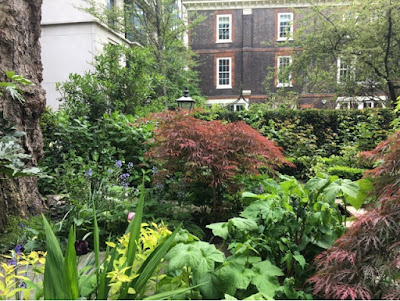 Acers flourish in the mixed woodland planting.   The challenge of the garden has been the shade, but Centaura, hydrangea, begonia, Dicentra, Alchemilla mollis and white cyclamen have settled down happily with foxgloves, proving the old adage of right plant for the right place.    From this location, you can get a glimpse of Rectory House and garden across the road from Vestry House . 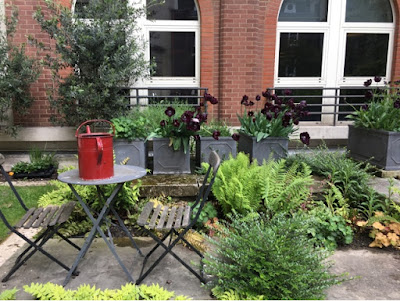 In the summer the tulips in this sunnier area of the garden will be replaced with Verbena bonariensis and Gaura, in a theme which will combine red, orange and purple flowers and there will also be a sweet pea wigwam.  The children at the St Paul's Cathedral School are busy working on an insect hotel, and we hope the bees will be delighting in the new flowers and visitors will come and take time to pause and smell the roses.