Bonnington Square Community Gardens sit in dramatic contrast to the traffic-dominated world around them.  Leaving Vauxhall station, you pass under a dingy railway viaduct and then wait for cars and lorries to give way before Langley Lane beckons and a different, green world greets you on the left.  Catalpas, or Indian bean trees, and palms line the road, with lots of delightful tree pits, where plants scramble beside the paving stones, alongside some charmingly quirky settings of plants and chairs. 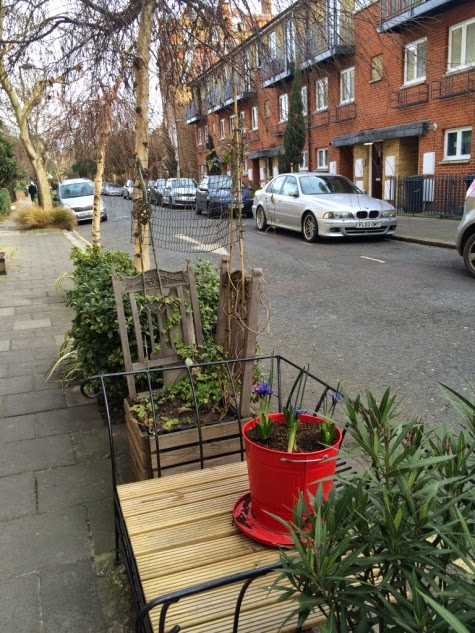 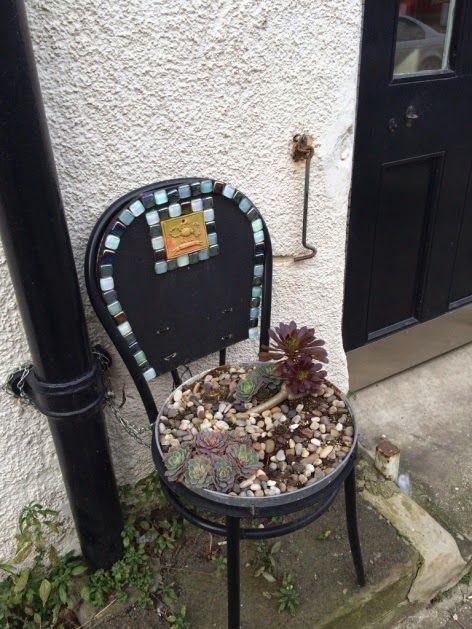 Keep walking and, before you come to a giant Mimosa tree, the Pleasure Garden, a small pocket of land, claimed by residents in 1994, is reached. From the café side, it looks as if the back gardens of the adjoining terrace have been given up for the communal good. In fact the site was bomb-damaged, then became an unloved playground and then forgotten, as nettles took over. In those days councils were less vigilant about their land, land prices were much lower and so an eager builder alerted them to this neglected patch by asking to use the space for storage. The builder opened a pandora's box of gardening opportunities. Residents persuaded the Council to give the land to the community not the builder and went further, after establishing the garden, by digging up the pavements themselves to plant catalpas and many other trees.   You had to be young and enthusiastic to do this - digging up pavements by hand is no mean feat.  And they didn’t stop – every year since then has seen further improvements.

The Pleasure Garden, also known as Bonnington Square Garden, Harleyford Road and Brandon Estate Gardens together comprise Bonnington Square Community Gardens.  Bonnington Square was the beneficiary of innovative sub-tropical planting, with an antipodean theme.  Two of the original gardeners (James Fraser and Evan English) brought a New Zealand and Australian influence and, along with Dan Pearson, the well-known garden designer, James Booth, the current Chairman, and many other residents, they have created one of the best community gardens in London. 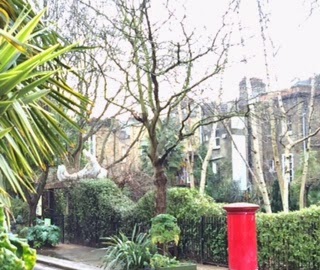 The small site is bordered by an undulating hedge of pittosporum and holly.  A walnut tree soars skywards as you enter through a pergola around which a mulberry tree and wisteria climb. Above you, an enormous white hand sculpture extends its fingers - a helping hand.  There once was a fishing boat perched up here, but local folklore talks of it setting sail at midnight one day, never to be seen again.  On the left there is a large industrial wheel, salvaged from a local factory where it was once used to wet cut marble. 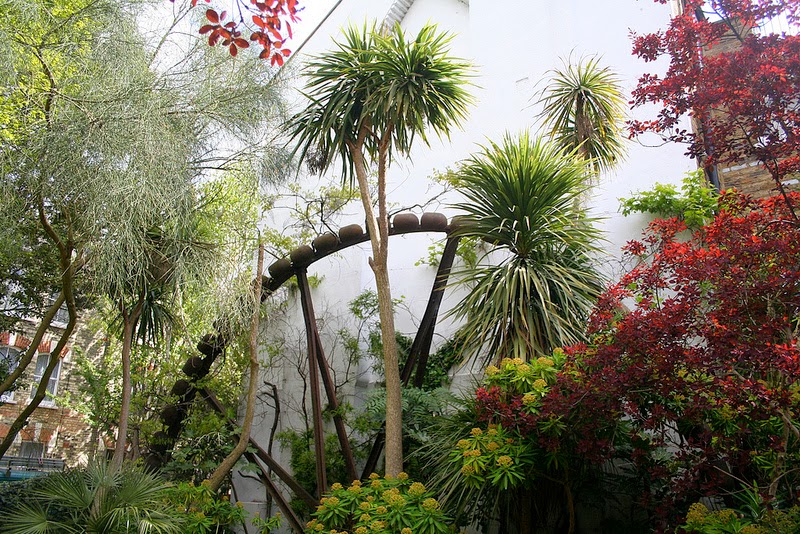 There is abundant seating for the visitor to admire the wide range of plants packed into a small space - bear's paw, acanthus, echiums, banana plants, cannas, ginger, Brugmansia, cloud purple plant and Ricinus, to name but a few.  A recent experiment has been to try out an eddoe, a West Indian plant. An art project resulted in handwritten plant signs decorating the borders, and at night the magic of the garden continues with up-lighters and fairy lights twinkling away. 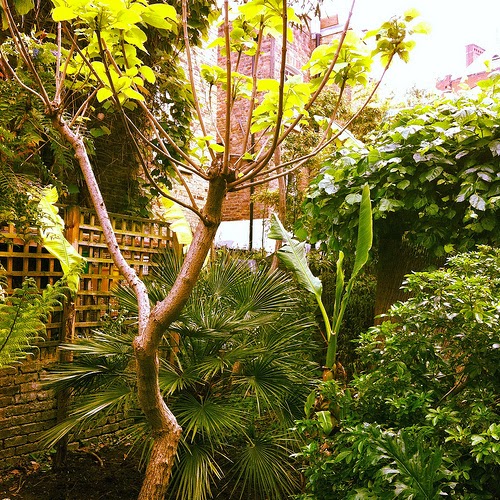 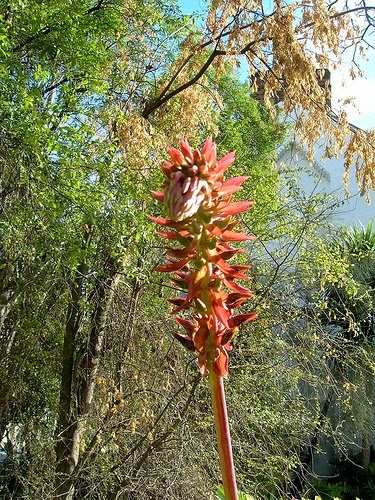 When you leave Bonnington Square there is another, larger community garden to admire in Harleyford Road, with more European planting, and an imaginative use of mosaics through its winding pathways and secret play areas for children. In fact, this was the first garden of the area. You can just get a glimpse of this garden if you squint hard through an open passageway. Here is also where teas are served on the Open Garden Squares Weekend. 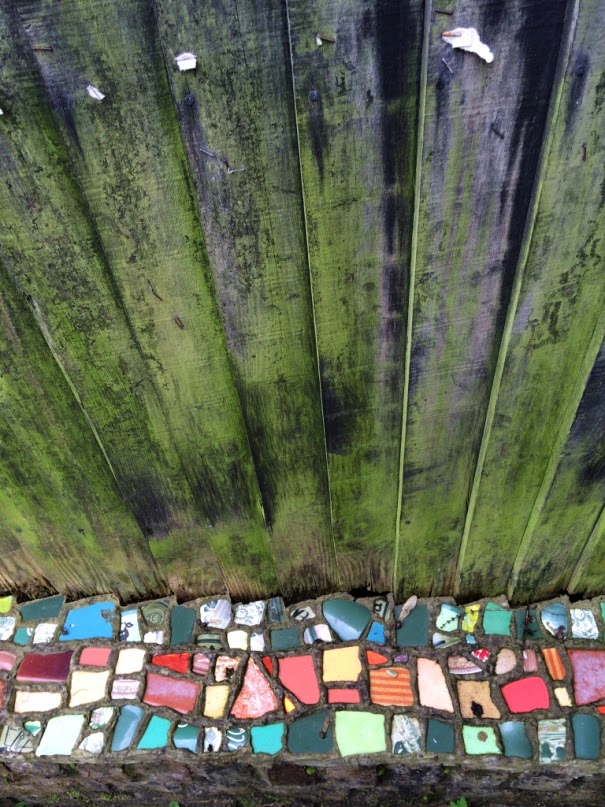 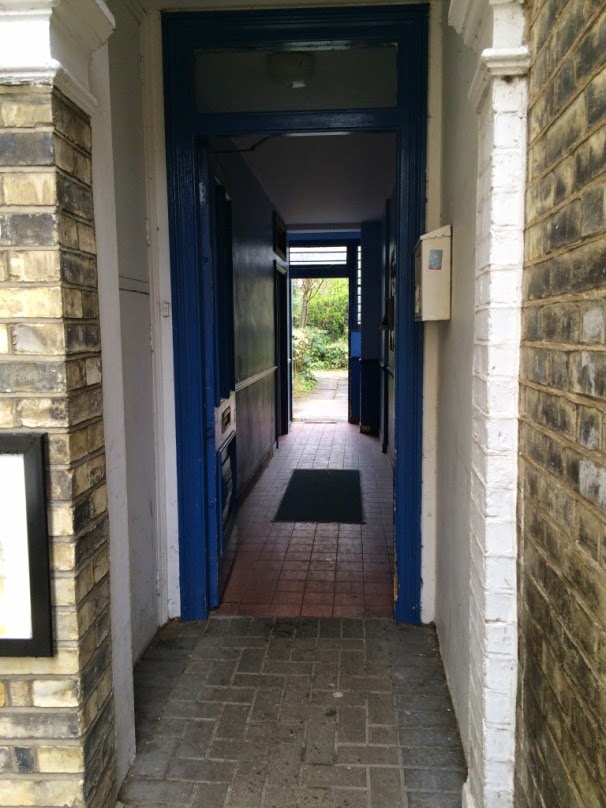 But on any ordinary weekday, you are spoiled for choice with a delightful café (Italo) and community restaurant (The Bonnington Café), each a few paces away from one another and the gardens. The residents love these cafés and they are given pride of place in the heart of the community.  In 2014, for the 20th birthday of the Pleasure Garden, they extended the pavement in front of the Italian deli and café, and, when I visited, an artist was having lunch there as she painted the scene.  My croissant and coffee were amongst the best I've tasted in London, and pasta dishes were in big demand.  The Bonnington Café is owned by residents and has a different chef every day. The venue is also used for film and music evenings - with a music festival planned for the area as a whole later this year. 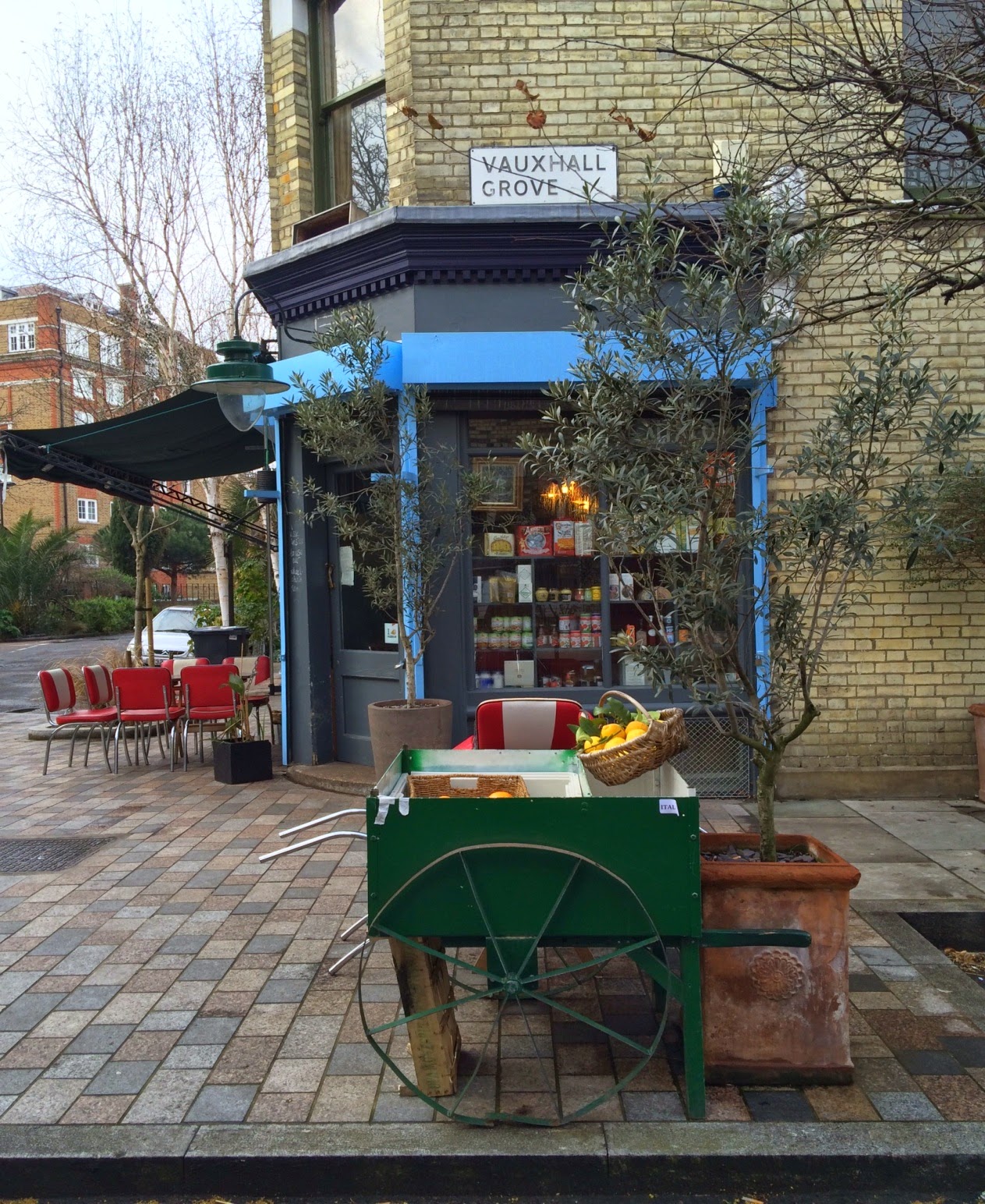 Parrots seek out the bean pods of catalpas at this time of year, swooping down to pick and then scatter them across the pavements – contributing their bit  to the exotic flavour of the gardens and neighbouring streets. Starting on Easter Saturday, there will be a sale of plants every Saturday, as plants become available. Yet another reason, as if you need one, to take a wander away from London's traffic and sample the delights of Bonnington Square Community Gardens' plants, trees and cafés.  Local legend has it that once a year the huge industrial wheel turns and brings forth champagne from worlds below - who knows, it might just be your day. 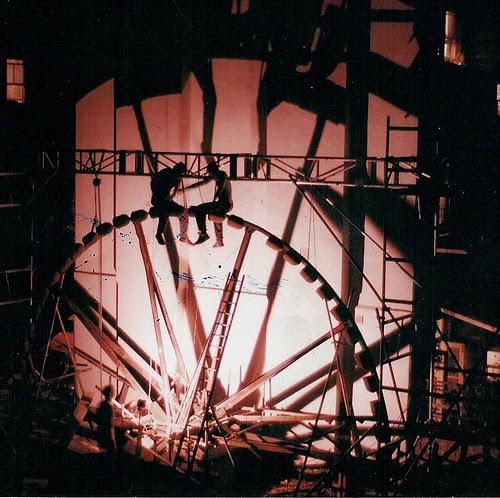