King's Cross and St Pancras have seen such a phenomenal building programme, said to be the biggest construction project in Europe, that the area to the north of the stations has even been given a new post code - N1C.  And, amidst the glass buildings and stylish modern architecture, beside the canal that flows through it all, nestles Camley Street Natural Park.  Nature lovers with a vision secured this spot where, since 1985, a real-life nature reserve has taken over the former coal yard. 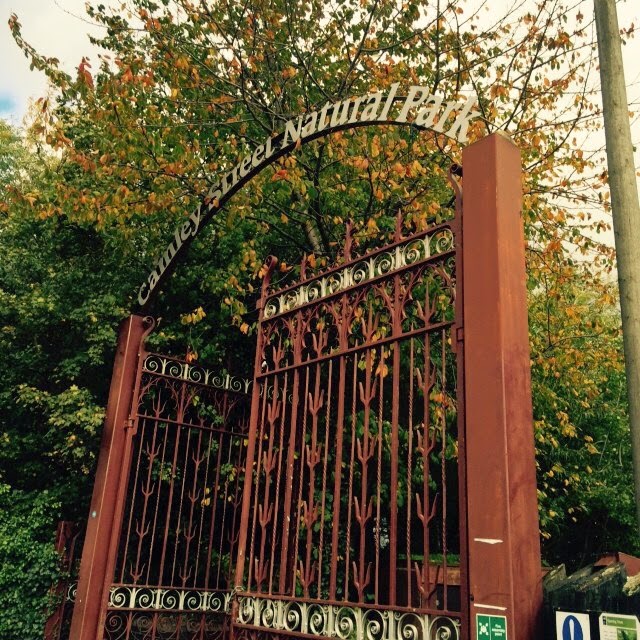 Camley Street is on the one hand a treasured area for quiet contemplation but is also abuzz with  community projects and scientific innovation.  When I arrive, a long line of young schoolchildren in their bright high-visibility vests are chuckling and laughing as they are escorted out through the high iron gates through which you pass to enter the garden. 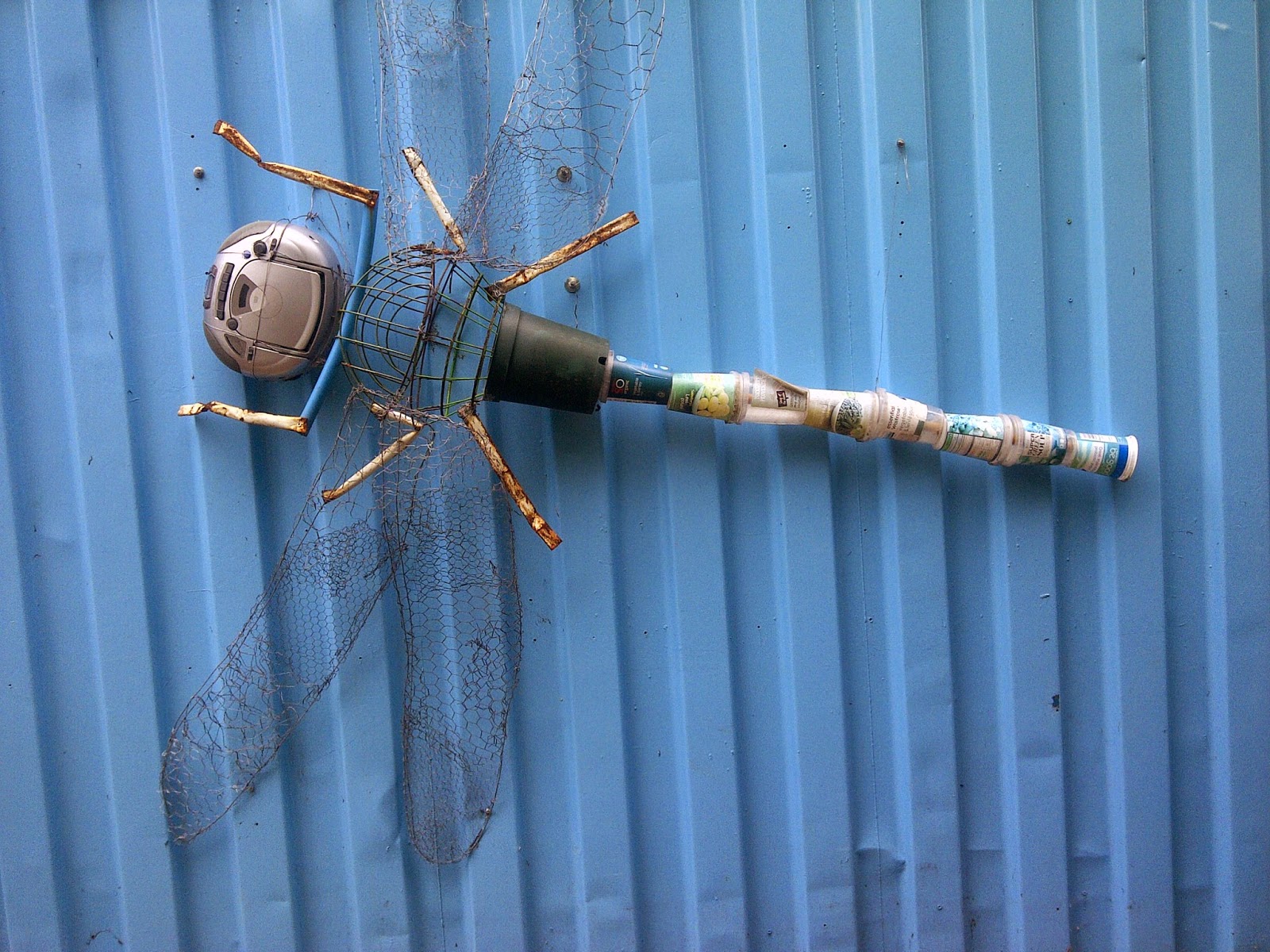 Maybe they were laughing at the dragonfly. Once inside, a sculpture by Andrew Lee, made from recycled cartons, adorns a faded blue storage unit - a dragonfly  to symbolise the recycling on which the garden is founded. 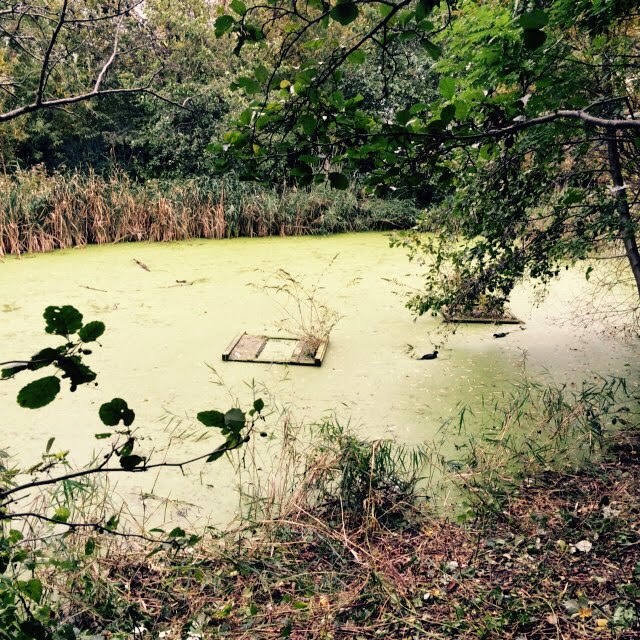 Camley Street knows what a strategic position it has on London's green corridor - the canal - and has developed a variety of projects and structures which reflect this.  There's WOW (Wildlife on Your Waterways) for the stretch from Kentish Town Lock to Islington Tunnel; floating islands beside the canal for passing waterfowl; waterside viewpoints created by the Finnish Institute in London and the Architecture Foundation;  a barge with a floating forest garden on which food is grown to engage young people in a 'Do You Dig It' campaign and, last but not least, a painted pond-dipping platform where you might just as easily find the odd courting couple sitting, or office worker eating sandwiches, as well as children with nets looking for tadpoles.  The canal flows into the park to its pond, where coots were swimming amongst the duck weed.  Crayfish, sticklebacks, frogs and pike live in these waters and the birds, bees and butterflies are well looked after here. 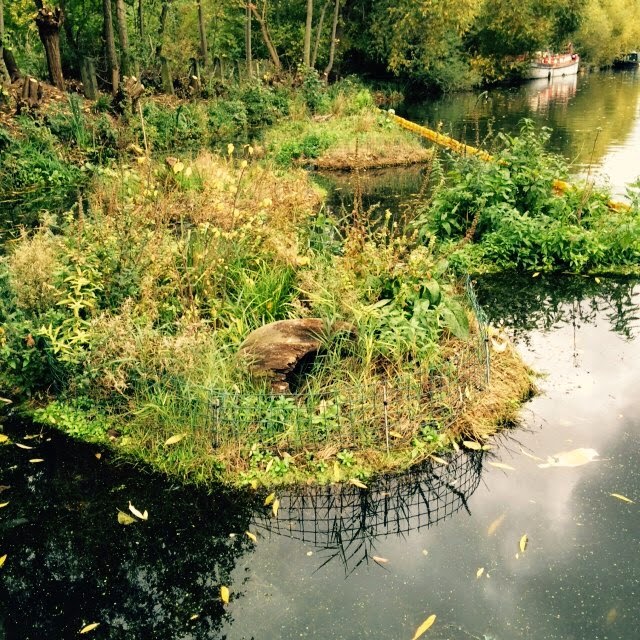 Camley Street Natural Park is also home to the London Wildlife Trust, and is nearly as old as the Trust itself.  Next year will be its 30th anniversary and the workers are preparing an exhibition to demonstrate the changes and progress made at the park during this time. There are five employees, some full-time, some part-time, most of whom started their contact with the park as volunteers.  The many volunteers they manage look after visits from corporate groups, ex-offenders, local residents, schools and university students, to name but a few.  There are beehives, looked after by Brian the Beekeeper from Urban Bees, wormeries and clay ovens.  Now internationally acclaimed, the park has won numerous awards, including Green Flag awards in 2010, 2011 and 2014, as well as first place as Camden in Bloom's Best Environmental Project. 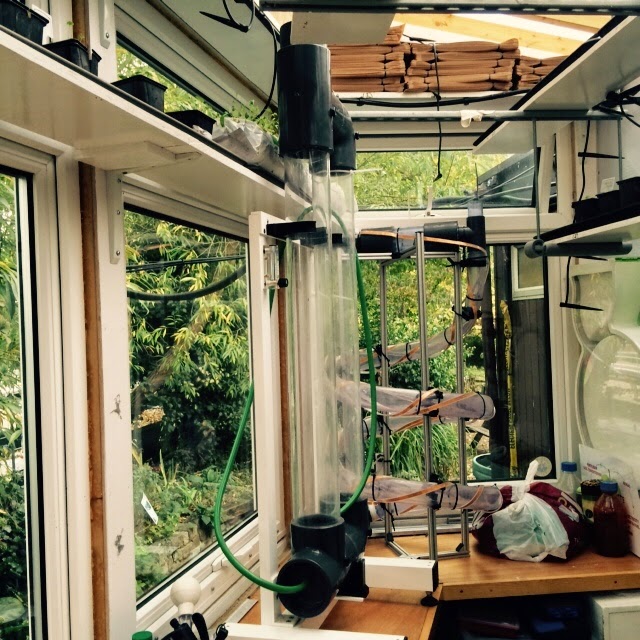 One building in the park stands out from the rest - it contains large tubes and pipes in a white laboratory and houses an anaerobic food digester, creating renewable energy.  Fittingly, as the skyline around the park used to be dominated by large black gas holders, there is a small gas holder named after them at the heart of the process.  Food from local restaurants (25 kg a day) is being digested as part of a trial to monitor by-products and put them to community use. It operates on a closed loop cycle and is linked to the composter and wormeries. Rokiah is based here - wearing a lab coat, not gardening togs, to oversee the process.

The sales stall in the park offered unusual presents - worm juice as well as dog roses, hawthorn and blackthorn trees.  Next year, when it opens for Open Garden Squares Weekend on 13th and 14th June, there will be activities aplenty, including tours, a photo exhibition, children's activities, picnics and refreshments. It may also open next year for wedding parties - what a stunning location that would be, eh?