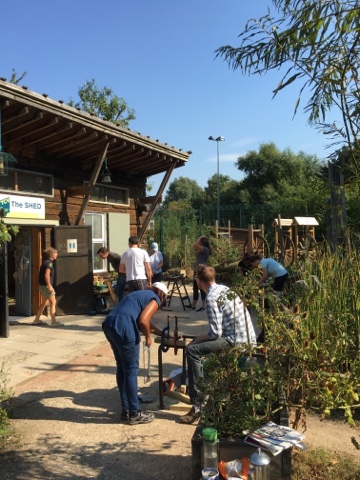 This was the active scene which greeted me when I visited the Stave Hill Ecological Park in Rotherhithe - volunteers performing a variety of essential roles under the guidance of Rebeka Clark, their magical multi-tasking site manager, just as they do every day.  She has calculated that there are 4500 volunteer visits here each year, and I was seriously impressed at the scale of their presence in the woods, in the vegetable garden and at the Urban Ecology Office of the Conservation Volunteers located here. 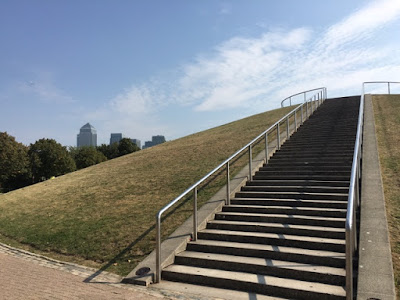 The Ecological Park is run by the Conservation Volunteers (TCV) under TCV Urban Ecology, a national organisation with a small handful of permanent sites.  This one is one of the jewels in their crown, created as part of the redevelopment of the Rotherhithe area in the mid 1980s. This was Surrey Docks, which had degenerated from a large, working London dock into an area of neglect, with rubbish dumped into the tanks which used to store timber for the capital.  Nature is now protected as a mosaic of grassland, woodland, scrub and wetland habitats. One of the curious contrasts of this area is that, from Canada Water station, you walk through long avenues of brick-paved streets and pavements before the nature site reveals itself and the seemingly interminable bricks disappear. It's a forgotten but newish area of London, which makes the discovery of the Park all the more special.  And the views from the enormous mound which makes Stave Hill itself are a new way of seeing Canary Wharf and London's river and skyline. 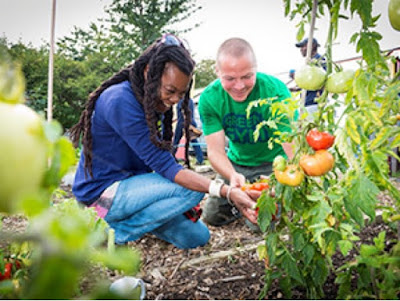 Volunteers really are at the heart of the park. The website features them prominently and promotes their involvement as as a fun and life-affirming activity.  They help with the large five-acre grassland site and the smaller half-acre compound garden, where there is always a welcome cup of tea and a biscuit for the helpers. The last fourteen years have seen a visitor centre built, a multi-purpose space which doubles as a classroom, and - in keeping with the park's philosophy of using reclaimed or repurposed materials wherever possible - this centre is proud to have given a home to paving slabs from Trafalgar Square. 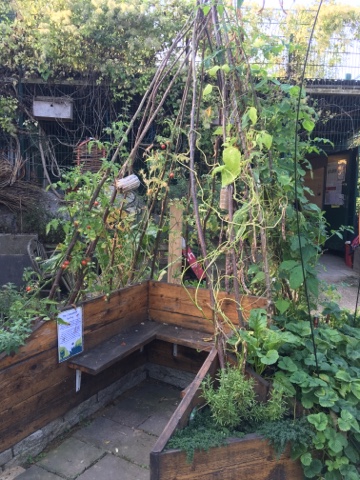 The central compound has different focal points.  This is a ‘Tea pea’, a replica of which will go to a local primary school.  It has been planted with strawberries, horseradish, mange-tout, beetroot and herbs. 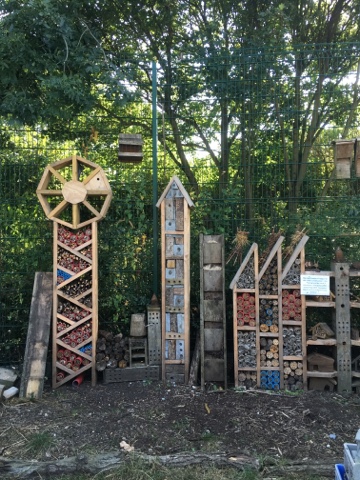 And this is the Creature Feature, a series of insect houses, which I thought reflected the external high-rise environment.  The aim is to change the primacy of bees for nature conservation, emphasising the role of ladybirds and lacewings.  Not that they neglect bees - in fact the beehives they used to have in an adjoining field, are expected to return soon, once the field's habitat has been enhanced for them. Around the Creature Feature the plantings are an attractive mixture of pinks, Verbena bonariensis, crow garlic, rose garlic, teasels and crocosmia. 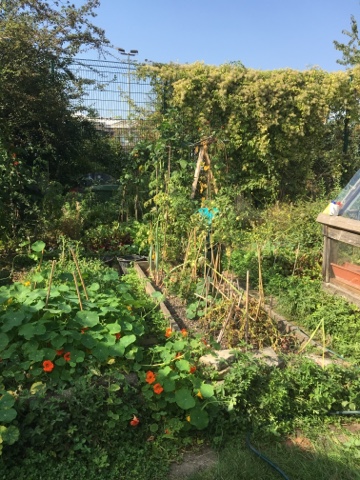 Over in the vegetable plot, cucamelons, currants, raspberries and cherry tomatoes make happy bedfellows. Pumpkins and onions thrived here this year, with an ingenious system of using a bicycle to pump waste water around the plot. Paul has been its volunteer guardian for many years and he proudly showed off his Jerusalem artichokes and a common chaser dragon fly which flew by and settled on a stalk. 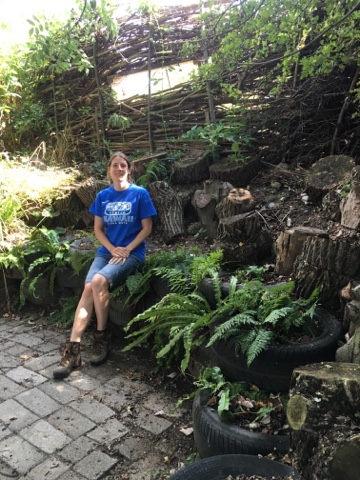 Claire showed me around the compound.  She is one of 28 Natural Network trainees funded through a grant from the Heritage lottery and is seen here in the woodland area, where a fern garden has a section for lilies of the valley and wild strawberries line some of the paths. There are projects galore which she helps Rebeka to coordinate such as a ‘gentlemen's convenience’, which will use urine to interact with straw and make compost, a fox box and a sound room being planned from bales of straw. 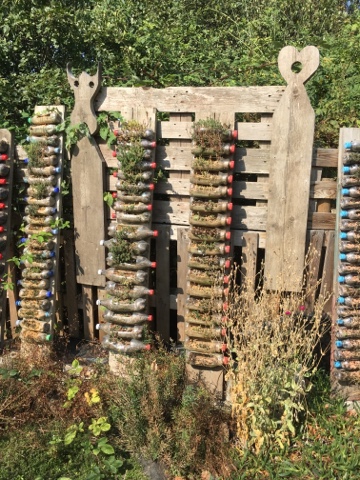 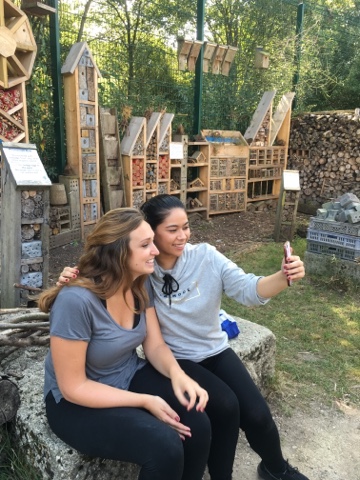 Workers from Price Waterhouse Coopers were being trained by Rebeka on my visit - learning how to use a saw to make noggins (squares of wood) for trellises they were building - cleverly designed to provide homes for yet more insects.  Here they are taking a break from their work for a quick selfie in front of the Creature Feature.  You can see here too the length and size of the Creature Feature - planned to accommodate a visit from a class of schoolchildren so they can all peer inside at the same time and observe insect behaviour. There was so much diverse volunteer activity going on - from the supervision of power scythe training to the assembly of a green roof - all coordinated by a very dedicated site manager and her team of amazing volunteers. 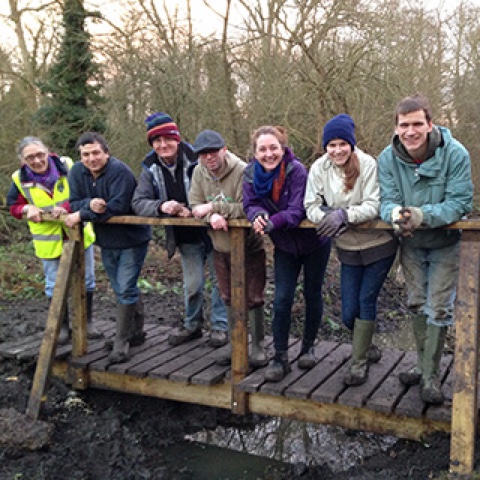 It's a very happy Ecological Park to visit - which takes you through an area not often frequented by tourists, or even Londoners. Put it in your diary for next June and you won't be disappointed.
Posted by Open Garden Squares Weekend at 08:35 No comments: