A select few of the gardens listed in Open Garden Squares Weekend are open all year round and, if you ever wondered why such gardens are included, a visit to Arlington Square in Islington would answer why. Arlington Square and its residents always put on lots of special events for the visitors, and the open weekend is a way of showing off the square’s charms to a wider London audience.

The residents of the square and its neighbouring streets are a glowing example of what nurturing a community spirit really means. Three years ago a passer-by would not have spared a second glance at the garden in the square – instead hearts would have sunk at the poor, dry and impoverished soil and the litter and debris lying about. But, luckily, some residents of a nearby street had already enjoyed the benefits of gardening and reclaiming public spaces. Ahead of the trends now very evident through initiatives like the Chelsea Fringe and Edible Bus Stop, they had created gardens in three, tiny plots in front of an electricity sub-station and under the street trees. Emboldened by the joy the plantings brought to all, they moved on to their public square around the corner... and never looked back. Now the square oozes colour and scents. Woodland plantings around the edges were inspired by the work of Beth Chatto and Karen Junker. Here there are Japanese maples ('Osakazuki', 'Kinshii', 'Koto-no-ito', 'Corallinum' and the coral-bark maple) and magnolias (M. x Soulangeana 'Alba Superba',  'Genie' and the summer-flowering M. sieboldii), creating a second storey of plants under the trees, with rhododendrons and camellias planned for 2014. The paper bush plant (Edgeworthia chrysantha) flowers in winter, and an ornamental blackberry (Rubus cockburnianus) shows off its silver-white stems.

In the middle of the square, the tired old rose beds have been replanted and transformed and even when the scent of roses is almost gone in autumn, the Verbena bonariensis lingers on, swaying gracefully in the breeze, and the 'Little Carlow' aster comes into its prime. Hundreds of allium bulbs put on a wonderful show in late spring and, as the rose petals fall, industrious residents gather them up for pot-pourri bags, which are on sale during the Open Garden Square Weekend. Olive oil has also been sold then, from the Spanish estate of a resident, and now the square has its own two, mature olive trees, so watch out for home-grown olive oil in the future. All the proceeds from these sales go back to the garden – to fund new plants and projects. 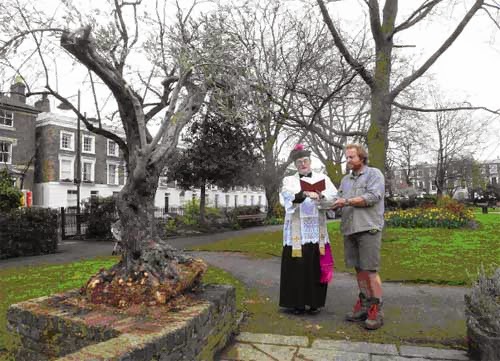 There is always something new happening in the square. Last year, they developed a herb garden, taking back a corner used for dumping assorted rubbish; and now people literally do pop out of an evening to get some rosemary or thyme for the evening meal. They’ve taken the difficult decision to exclude dogs, but have worked hard to include local children in a variety of events throughout the year. When I visited people were gathering to sort out bric-à-brac for their forthcoming fête, at which there would be an Arlington bake-off with a gardening theme, an egg-and-spoon race and tug of war, all to the tune of a local band. Posters also promised poetical music in the local church. 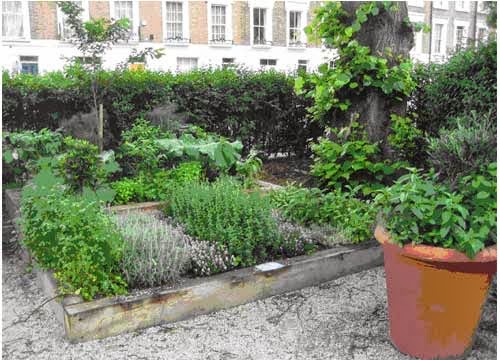 As if all this wasn’t enough, the residents have also taken on the project of creating a new garden for a sheltered housing group in the square, and are working with contractors to plant new trees at the end of local roads blocked off to through traffic. Once you’ve visited and seen all this activity next June 14th and 15th, we hope you will agree that Amazing Arlington Square really is an open secret.