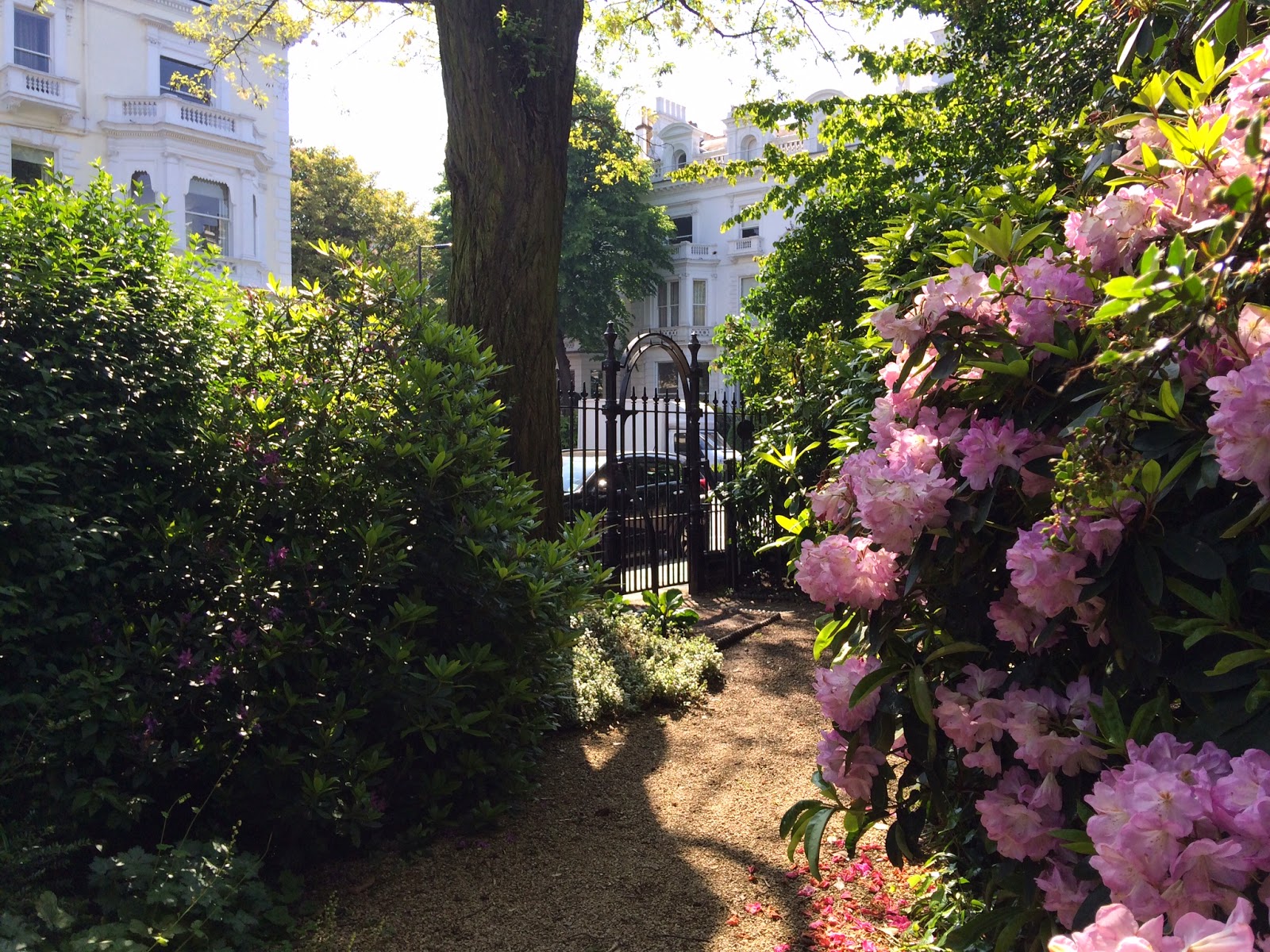 Walking through Pembridge Square feels like walking through a glamorous home, with each room revealing hidden delights at every turn. 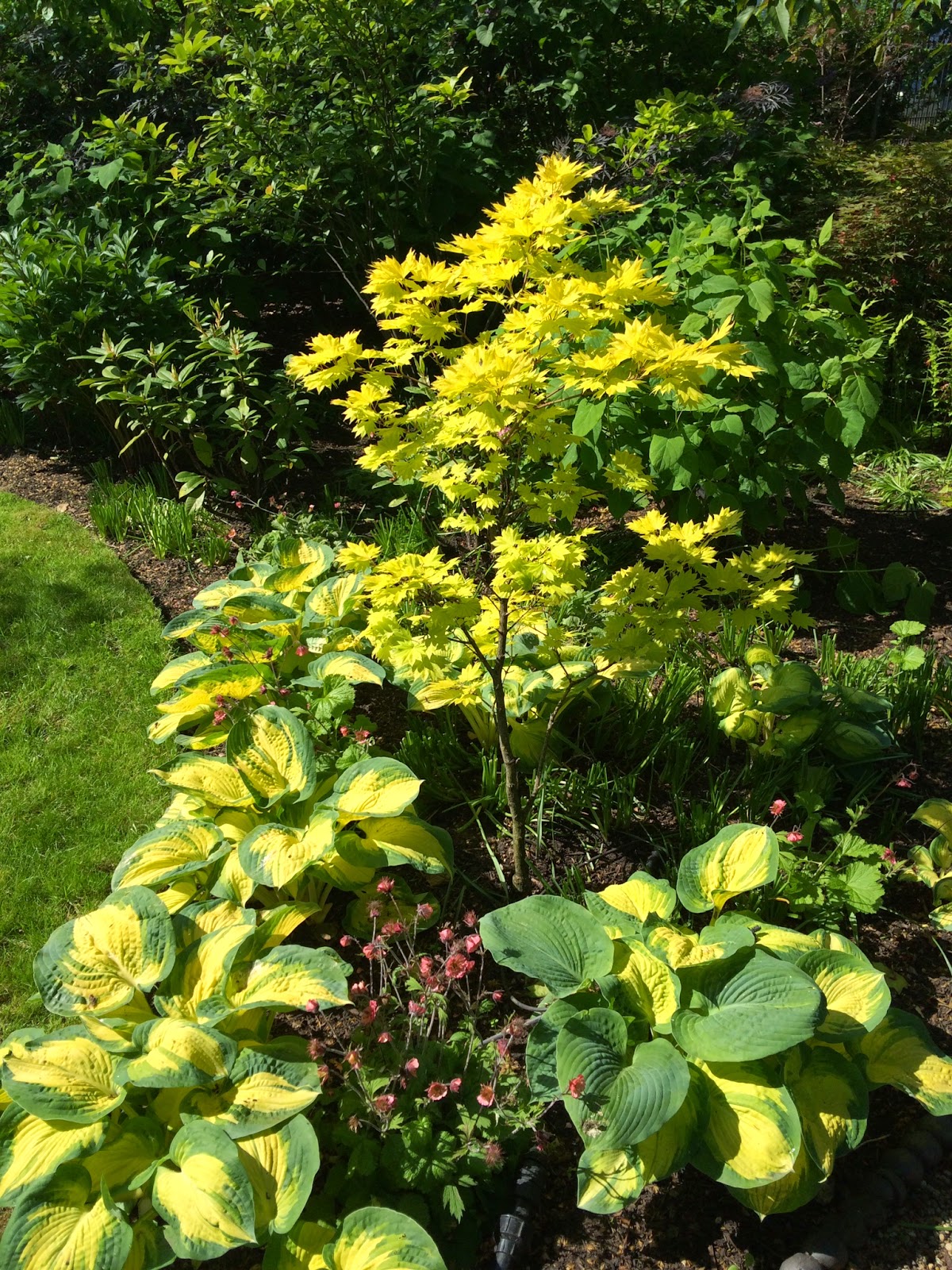 Gravel paths, sometimes edged with rhododendron and bergenia, link the rooms which can change from a woodland scene, where bluebells bloom in spring and the grass is left to grow
long, followed by poppies. Ropes are used to good effect to fence off areas for wildlife preservation, whilst elsewhere a winning combination of hostas and yellow acers catches the eye, before a lawn and a classical long herbaceous border beckons. A maze, children's play area and a rose garden complete the suite of little rooms.

But, getting down to the basics, how is all this beauty managed and paid for? For a full understanding we have to go back over a hundred years to 1851 and 1863, in the reign of Queen Victoria. In 1851 the Kensington Improvement Act was passed, followed in 1863 by the Town Gardens Protection Act.

The Kensington Improvement Act was a response to complaints from local residents. They ring many bells today - perennially familiar concerns about inadequate maintenance of footpaths and lighting. Taken together, both acts enabled residents of garden squares, such as Pembridge Square, to establish a committee to manage the garden, and agree annually the cost of maintaining it. The Council would then be required to collect the garden levy, alongside the rates - a system which has continued in Kensington to this day. 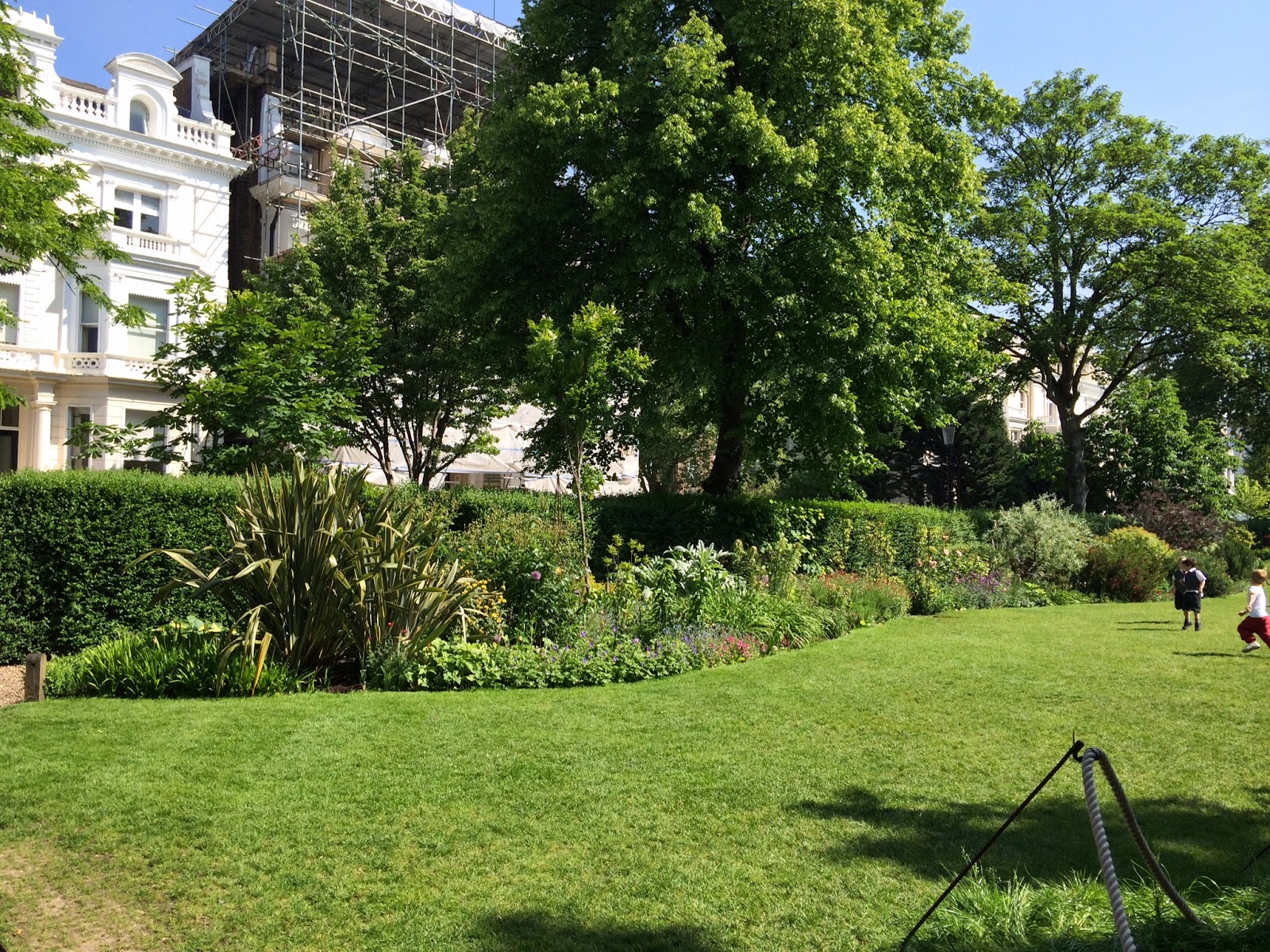 In the present day, with changing home ownership and houses in London being bought for investment purposes and sometimes left to stand empty, problems could arise with the upkeep of garden squares; but in Kensington the aforementioned acts safeguard the garden income and the Council enforces its collection, even if a property lies empty. Interestingly however, Pembridge Square, although in the borough of Kensington and Chelsea, is bordered by houses in two different boroughs, Kensington & Chelsea, and Westminster. Those houses based in Westminster have to be billed individually rather than the garden charge being collected through the rates. All very complicated. 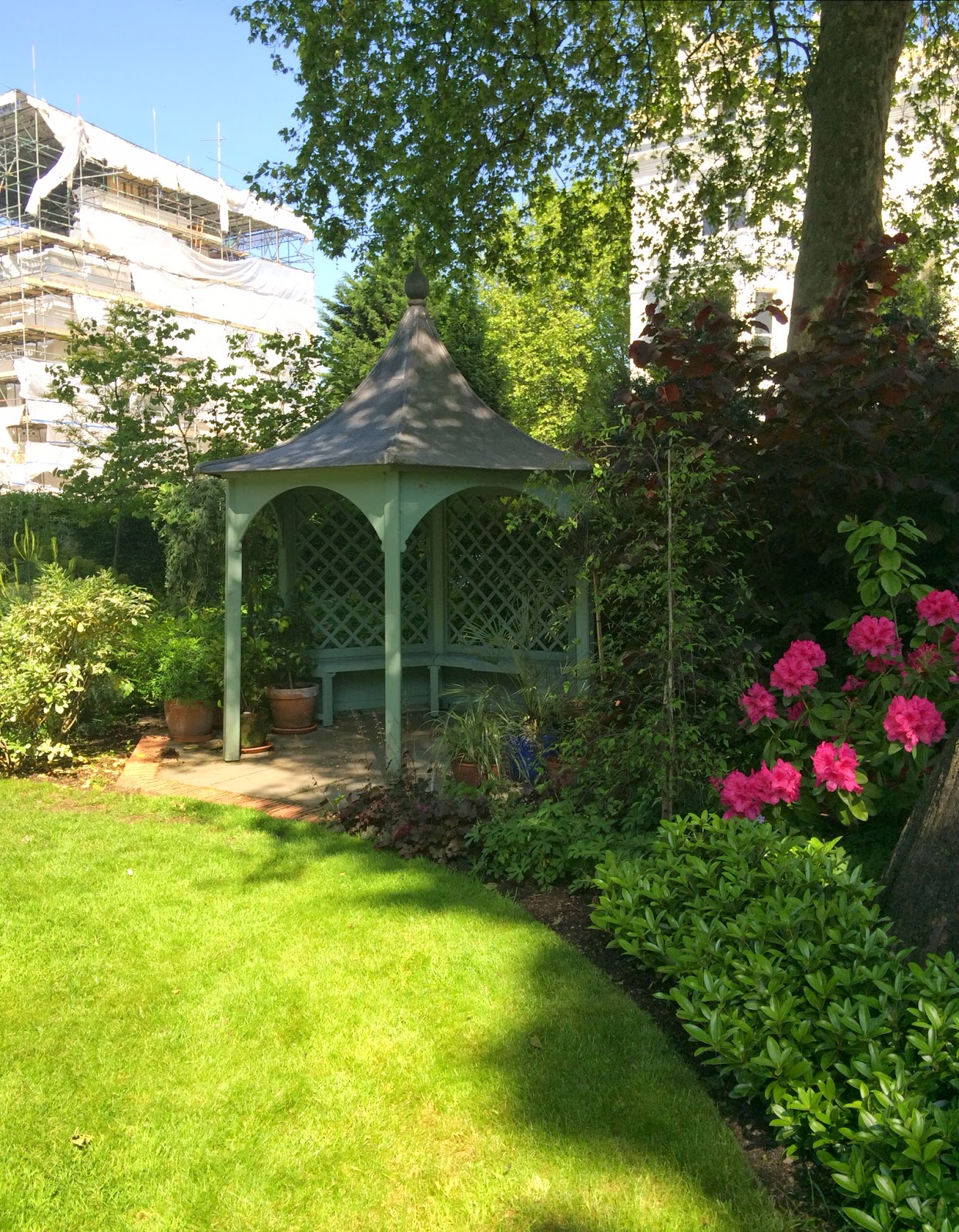 Pembridge Square was built between 1856 and 1864 on the Hall-Radford Estate and was completed in 1865. Its beauty has recently been recognised and it has received awards for the best garden in North Kensington and best large private garden square. The gardener, Robert Player, and the managing agents, Westbourne Estates, can be justly proud.

In the eastern end of the square, the wildlife plantings predominate and the garden moves across to become a formal rose garden in the west. In between, a hornbeam maze was planted three years ago, using some of the hornbeam that used to line the refurbished, post-war railings. The maze is nearly fully grown and branches seeking to escape its straight lines were awaiting a cut when I visited. Holly has replaced the hornbeam along the railings in places. Tree ferns as well as red or golden acers give height in the plantings, and there are plenty of benches and summer houses where you can stop and admire the flowers as you journey across the square. 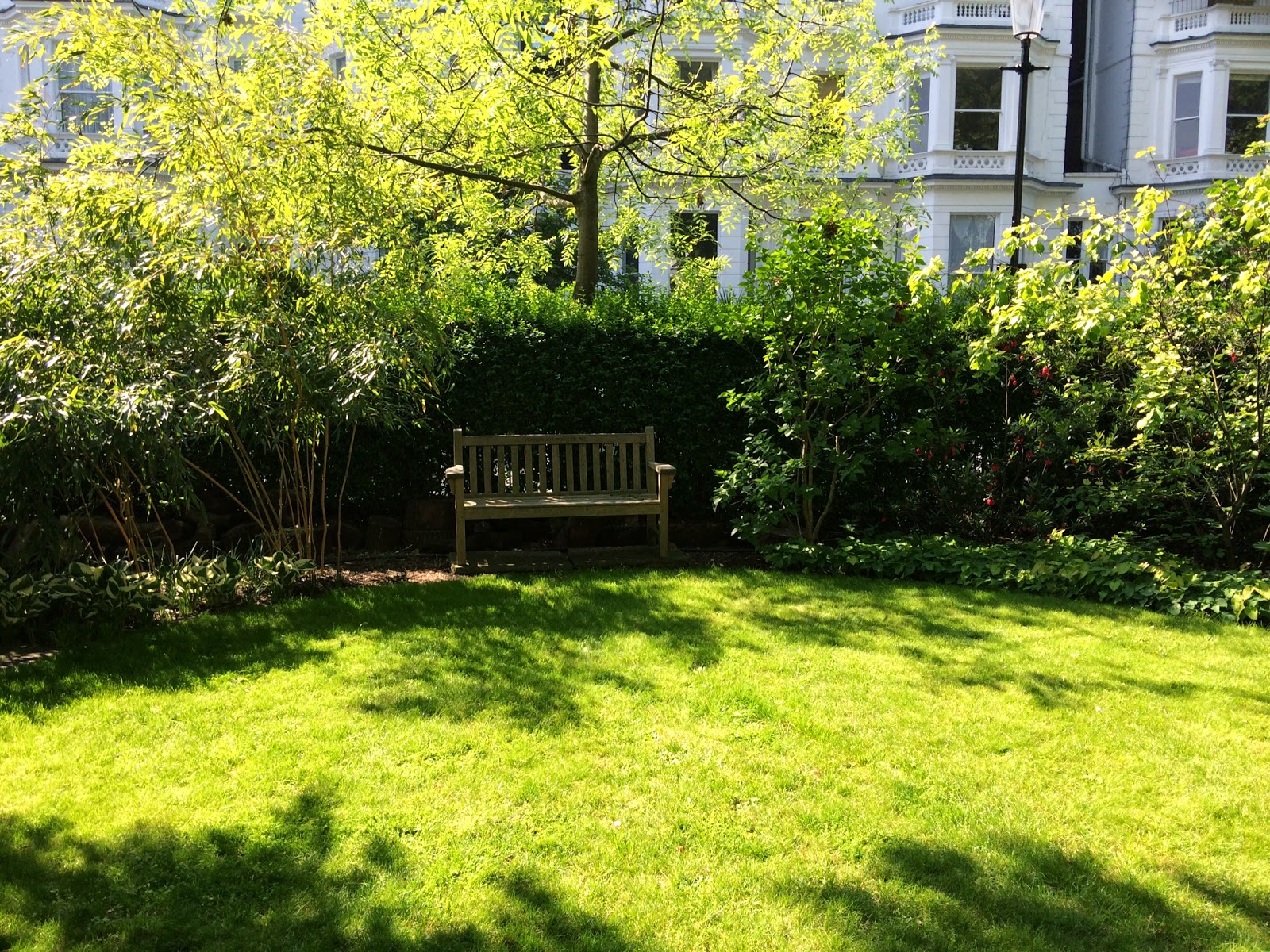 The garden provides for its local community in many ways - as a playground for schoolchildren, outdoor table tennis and Christmas carol singing, to name a few activities. 2014 was its first year of opening for the Open Garden Squares Weekend for some time and we hope it will become an annual event, enabling those passers-by I saw peering longingly through the railings to have a brief annual taste of the joys of this classic London garden square.