Surviving and thriving in the heart of the West End

The Phoenix Garden has to be one of the most aptly named of all the gardens Duck Island Cottage has explored for this year’s Open Garden Squares Weekend. It was created in 1984 by a group of local volunteers from a space which was acting as a car park. It is a remarkable example of what can be achieved with about six inches of topsoil below which sits a bedrock of rubble. The Phoenix Garden is the only surviving garden from an original group of seven community gardens in the Covent Garden area; the other six were lost to development. However, given the involvement of the London Borough of Camden, Phoenix’s future is safe and secured, with a much-needed new garden building planned for 2012.

﻿
Tucked away behind Shaftesbury Avenue, and overlooked by the 18th-century spire of St Giles-in-the-Fields parish church, the garden today bears very few traces of its colourful history – there was a leper hospital on the site in the early 12th century and the images in Hogarth’s infamous Gin Lane of 1751 were inspired by contemporary scenes and characters from the area. 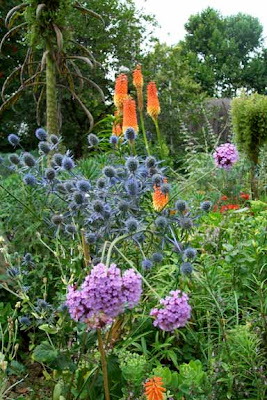 In the company of its gardener, Chris Raeburn, and Jane Palm-Gold, from the garden’s management committee, Duck Island spent two hours exploring the garden’s plants, trees and gently sloping walkways, with many seats created using stones saved from the previous site. Since 2002, Chris has worked a running programme to re-landscape and re-plant, in what previously had become an overgrown, unruly space. His planting features both wild and cultivated specimens, and the effect is of an ordered but thoroughly natural garden. The beds here are made up of dense, supporting layers, wonderful to look at and fantastic environments for insects and birds. In Chris’s own words, plants will grow in any location if they are suited to the site. Given the land’s relatively recent usage, scrubland weeds are key to underpinning the garden’s micro-ecology and certain beds have never been dug by Chris. As he says, if you constantly dig the soil, vigorous colonising plants will try to take over and the garden does not need the kind of tending required by an allotment. He favours long-flowering ornamentals so that the garden has colour and scent all year round.

London’s corporations and companies tend to favour formal, neat designs for their gardens, and a generous annual budget is key to maintaining this look. However, Chris’s first yearly plant allowance was £40 and, although it has grown a little since, it is a still a fraction of what can be spent on a garden, along with chemical fertilisers and herbicides. As a result, The Phoenix Garden features a diverse range of plants and wildlife and so genuinely provides an easy access to nature.

We look forward to seeing The Phoenix Garden in all its glory this June, and we know you’ll be captivated and intrigued by this inspirational space.

Information on visiting The Phoenix Garden »