Peace by the Tracks

Hidden behind the busy Hampstead overground station, the World Peace Garden promotes a powerful philosophy of peace to its neighbourhood. You have to be observant to spot the triangular strip of land whose hypotenuse borders the railway tracks. It’s 42 metres long, tapering from 20 to three metres and straddling the steep slope down to the station. But, once inside, the landscaping, atmosphere and messages draw you into another world. 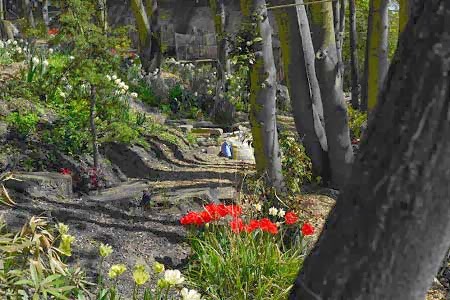 Jonathan Bergman looked over the street railings here 10 years ago and saw a dumping ground for the railway, complete with used needles and rats. His vision was to transform the space and, without external funding, he - and a small group of local businesses and residents - stumped up their own private funding to buy the land. They had grand visions of vertical walls, tumbling with plants, to distinguish the space from the railway. Although they secured planning permission for this vision, they also had the sense to conduct some real community consultation first. The community gave a strong thumbs-down to any plan which obscured the railway, meetings got bigger and the World Peace Garden came into being. 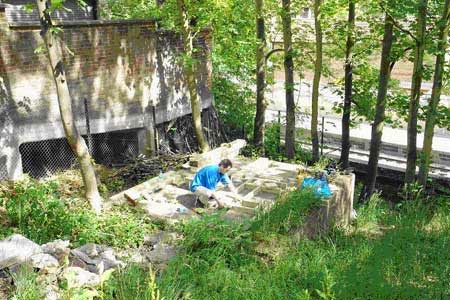 Starting by picking up the rubbish by hand and then wielding pick-axes, the community made inroads into the space. The ugly graffiti on the concrete walls was covered with bamboo matting and decking, and they gladly accepted the offer of free railway sleepers. Once space was carved out of the trees and saplings, the logs and woodchips they generated were used to make paths on the plot, all the way down to the railway tracks.

It is surprisingly peaceful sitting in the garden, and the rhythmic rolling and rumbling of the trains adds to the serenity, believe it or not. The community was right to insist on including the trains. Having a train at the end of your garden brings back the warm glow of books like The Railway Children and sitting watching passengers come and go is a wonderful, free, café-like experience. A giant autumn crocus, alongside camellias and Cornus, caught my eye on the woodland pathways as I sat dreaming.

There has been a lot done to make children feel at home here in the form of a wishing-well and a tree of hope (a beautifully pruned hawthorn, shaped into a parasol). Primary and nursery school children come here to hang luggage tags with their handwritten wishes to its branches. And there are plans afoot to build a puppet theatre under the tree canopies in the future.

One of the old, ugly walls is adorned with glass tiles containing mottos and sayings – created by local artist Melissa Fairbanks, daughter of Douglas Fairbanks. Continuing the message theme, there is also an intriguing box on the railings with cards containing thoughts for the day. On the day I visited the thought was “Call the Bluff – One of my favourite definitions of fear is False, Evidence, Appearing Real.” All the cards are gone at the end of the day. 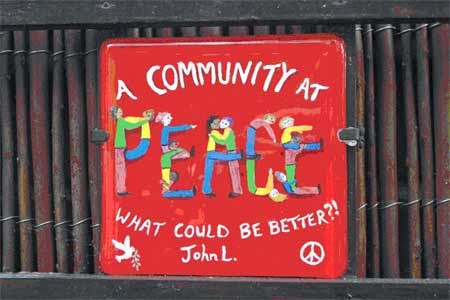 Like many community gardens, the World Peace Garden is continually evolving.  All the trees have been numbered and labelled.  A link has been established with the nearby Fenton House (also open on Open Garden Squares Weekend) to give advice on trees, a local yoga group has donated a cedar of Lebanon and Simon Berry of Natures Balance has given landscaping support. 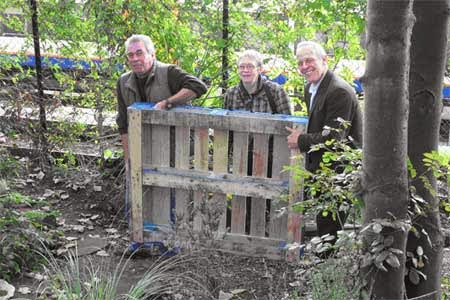 As a non-profit-making organisation, the garden’s main need is for more volunteers to come forward to help with maintenance and planting. When I visited, a couple stopped by, bringing wooden pallets for a future composting project, and every few moments passers-by would call over and wave from the street. In a month when we celebrate Armistice Day, this garden is the perfect place to visit to contemplate peace and to learn from its philosophy, which is that peace starts within yourself – I can only do me, I can’t change the world.