A Hidden Hinterland to Canary Wharf


It’s only one stop on the train from the Bank of England, but the abundance of herbs, flowers, birds and bees would have you forget you are in the midst of a global city when you arrive at Cable Street Community Gardens. Look up and there looms Canary Wharf, with two smaller tower blocks flanking the site, and the Docklands Light Railway running right through the middle. Step through the arches of the railway and you are in another world.

When I arrived, spring had just begun, the celandines were in bloom, the cow parsley was waist high and a wood-pigeon was having a sneaky bird-bath amidst the foliage that covered the wildlife spot next to Cable Street. This part of the gardens is given over to nature, and a garden volunteer turns up twice a day to keep the bird feeders full for the many different species that have discovered this soup-kitchen for birds. There are bats in the evening and tales of a parrot and a kestrel who once lived here too. And the bees – look out for a modern, green, plastic beehive on one of the plots and the story goes that the plot grower and bee keeper met her husband here, when he came to photograph the unusual-looking hive. That’s just one of the many ways in which these gardens have affected the lives of its growers for the better.
﻿
The gardens started through a campaign by Friends of the Earth in 1977 to reclaim derelict land in the city. A few years later and the Cable Street Community Gardens Association had been formed. Its success has been such that it has spilled out from the two small strips behind tin fencing which were its origins to a 50-plot site traversing both sides of the Docklands Light Railway, with another 10 plots round the corner in Glamis Street. Relationships with the convent, church and schools have flourished, as have those with the council and bankers in Canary Wharf, who have helped with funding and support. Many a commuter’s journey home has been cheered by looking down on the space and finding a gardener or their children smiling and waving back at them. One gardener has kept the convent in rhubarb for many years and everyone talks of who they donate their produce to. When you see blackcurrant bushes growing as high as your head with strings of fruit forming, you know that this is a fertile and special place.

The vegetables represent different countries and continents – from Japan to India to Eastern Europe and the Caribbean. English cockneys dig side by side with new-found friends from many corners of the earth. All are Londoners. Money from the banks had just been spent on some new benches, beautifully engraved with the names of growers who have passed away, and a granddaughter of one had come to remember the good days of her childhood, when she helped her grandfather sow potatoes and ride the donkeys on the open days. He had been born in Cork (where there is another bench for him outside a betting office) and had worked on the Thames Barrier before he eventually found Cable Street and started his gardening career. 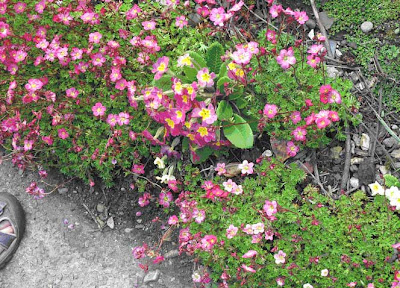 The open day for the gardens is now held on the Open Garden Squares Weekend and the organisers are trying to see if they can find any donkeys this year – but if they don’t manage to, they promise the most amazing food of bread, cakes and pastries (nothing shop-bought), a pottery sale and a local history tour, as well as a bric-à-brac sale.  The area oozes history – it’s not just confined to the Cable Street name – and you can drink in one of London’s oldest pubs, the Prospect of Whitby, after you have taken in the delights of the gardeners and their produce, and sampled the bit of inner-city magic they have made together. 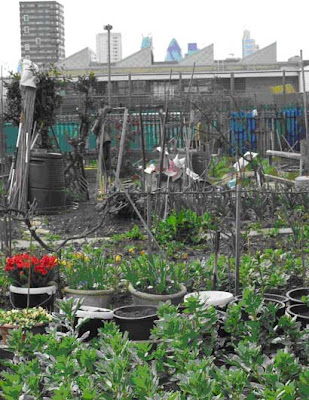